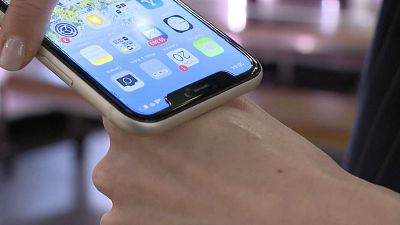 Swedish company DSruptive Subdermals has come up with a microchip that can be inserted under the skin so that users can carry their Covid passports in their arm.   -   Copyright  VIKEN KANTARCI/AFP
By Marie Lecoq  & AFP  •  Updated: 23/12/2021

As COVID-19 continues to rage with the spread of new variants, having your health pass accessible is becoming increasingly essential. But would you be willing to have it actually implanted in your hand?

That’s one use DSruptive Subdermals has been promoting for its implanted microchips.

The Swedish company, specialised in implantable microelectronics, wants to use its implants as a medical aid to track COVID-19 and other infectious diseases.

Biochips use near field communications (NFC), the same technology used for contactless payment, which allows them to be scanned by other devices, such as smartphones, door readers, and payment terminals.

"We know that the world of connected devices, the Internet of Things as a lot of people call it, speaks the language of NFC [...] So when I have a chip in my hand it allows me to speak the language of all these devices and interact with them effortlessly," said Hannes Sjoblad, Managing Director of DSruptive Subdermals.

But it also means that the microchip could give your data away as it can be scanned by anyone with a reading device.

"The real issue is data handling, which will be an issue later on with how data is stored... if the data is not secure, someone can get your information and once it's out there, it's hard to get back," warned Ben Libberton, a microbiologist working for MAX IV Laboratory, in an interview to Euronews Next in June.

However, to steal information from the chip, a person would first need to know that you have an implant, then touch it with a smartphone to activate it. Sjoblad also assures that the chips cannot track your location.

"They don't have a battery, they cannot transmit a signal by themselves, so they are basically passive. They sit there asleep,” he said.

“They can never tell your location, they're only activated when you touch them with your smartphone, so this means they cannot be used for tracking anyone's location.”

Implanted microchips aim at making daily life more convenient and are already used by a number of people and companies around the world to replace keys, access cards and IDs.

In 2018, Sweden’s state-owned train company even trialled biochips as a replacement for train tickets.

Amanda Black, manager of Epicenter, a digital hub in Stockholm that has made the chip available to its workers in recent years, said she feels the chip is even safer than traditional ways to store datas.

"Well I think it's very much part of my own integrity to have myself chiped and keep my personal data there with me, I actually feel that it's even more control in my hand having it in my own hand," she said.

Another company, Biohax International, who is behind the microchips used by the Swedish railways company, is working with health partners so that its microchips contain health information.

If someone is brought unconscious to the hospital, for instance, a simple scan of the chip could give doctors information about the patient’s pre-existing conditions.

COVID can damage sperm and make it harder to get pregnant

Could robots be better at restoring historical treasures than humans?