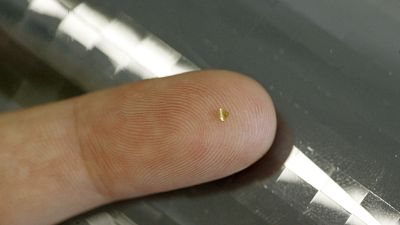 Thousands of people in Sweden are inserting tiny microchips under their skin — making their lives much easier as they no longer have to carry IDs, gym passes, and keycards to get into work.

But it's not without data risks.

About 3,000 Swedes have inserted the tiny chips into their bodies over the past three years, according to AFP.

The electronic tags are about the size of a grain of rice and are implanted in the back of the hand via a syringe.

Many employees use them to get into their office buildings, as a gym pass, to buy food from vending machines, and even instead of using train tickets.

In a year, some 130 passengers signed up for Sweden's SJ national railway microchip reservation service.

Libberton warns that by having a microchip implanted in your hand, you also give your data away.

"The real issue is data handling, which will be an issue later on with how data is stored... if the data is not secure, someone can get your information and once it's out there, it's hard to get back."

He also warns that some people could even be giving their data away without even realising it in the terms and conditions they sign.

Nevertheless, microchips have been hugely popular in Sweden, with some companies even holding so-called implant parties for their employees.

Epicenter, a digital hub in Stockholm that houses more than 300 start-up labs for larger companies, has made the chip available to its workers and to its member organisations in recent years.

One reason why microchips have been a success in Sweden is that "as it's a smaller country, most people have a great deal of confidence and also confidence with authorities," says Libberton.

That could explain why more people are getting the microchips in Sweden than in other countries.