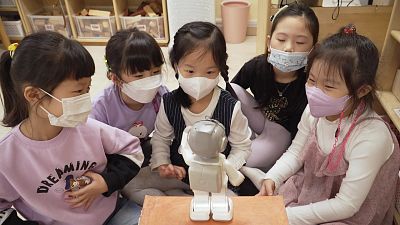 A tiny robot practices pushups in a kindergarten class, encouraging the children to join in. When the children engage it in conversation, it blinks and its pupils dilate to form a heart.

This is not the premise for a new episode of Black Mirror, but a real-life pilot programme in kindergartens in South Korea’s capital city, Seoul.

Alpha Mini is a 24.5 cm-tall robot, who can dance, tell stories, and practice kung fu and other forms of exercise.

It's being deployed in schools as a teaching tool for children, which, according to the city government, will help to prepare the next generation for a high-tech future.

Alpha has a camera on its helmet, which takes pictures that are instantly sent to a tablet for storage and viewing.

Along with this, it can "fart" on command, which is an especially popular feature with the nursery age children.

"The robots are helpful when at times it’s hard for me to read everyone stories. The robots can read out stories in a very entertaining way by switching voices accordingly".

And an official from the Seoul city government’s child care division, Han Dong-seong, said this "experiment will have a lasting effect" throughout the children's lives.

"In the future, knowing how to manage artificial intelligence and its related tools will be very important," Han said.