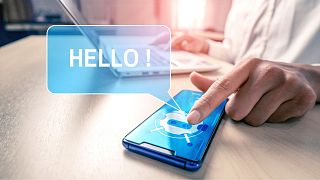 The call centre of the future might simply be an AI chatbots that's become indistinguishable from a human.   -  Copyright  Canva
By Reuters and Aisling Ní Chúláin  •  Updated: 06/01/2022

The next generation of chatbots powered by artificial intelligence could be so adept and sympathetic in answering your queries that you might never be able to tell them apart from their flesh and blood counterparts.

Five9, the company behind a new answering machine, claims their new technology - which uses AI to break down sentences into sounds and tones - will bring big savings to companies on personnel costs.

The key to making the caller experience satisfactory is using a human voice to train the AI.

"Yet, the voice that it uses, there's no reason for it to not sound great. Now, the more. lifelike that it can sound, at least in our experience, the better the reception of the customers that are going to be talking to it," he added.

To find their latest voice, Five9 auditioned actors in London and decided on Joseph Vaughn to record a series of scripts for the company.

We are capturing all of the audio data and all of the combination of frequencies and vibrations that are inherent to a voice, that as a human we would recognise is a voice, but the machine is just guessing sounds.

That audio was then broken down into sounds and tones rather than words enabling the AI program to recreate not only sentences but also distinct moods.

The software is trained to detect word combinations and tones in the caller’s voice so that it can respond to their emotional state as well.

"We are capturing all of the audio data and all of the combination of frequencies and vibrations that are inherent to a voice, that as a human we would recognise is a voice, but the machine just is guessing sounds," Rhyan Johnson, an engineer from Wellsaid labs who is involved in the project, said.

"Eventually those sounds and those patterns turn into something that again we recognise as a human voice. We could aim for perfection but the human voice is not perfect so we aim for human naturalness instead," he added.

Their new Virtual Voiceover tech will be available next year.