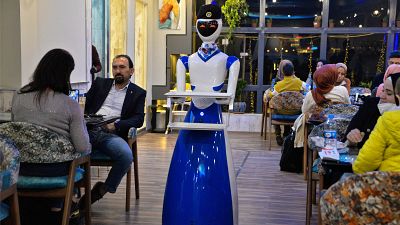 A robot waiter carries empty trays after delivering an order to patrons at the "White Fox" restaurant in the eastern part of Iraq's northern city of Mosul.   -   Copyright  ZAID AL-OBEIDI/AFP
By Aisling Ní Chúláin  & AFP  •  Updated: 23/11/2021

Futuristic robot waiters glide between the tables at the ‘White Fox’ restaurant in Mosul, greeting customers and delivering dishes to amused clientele.

It’s an unusual sight in the northern Iraqi city that has seen and suffered much destruction in recent years.

In fact, the technology powering this futuristic dinner service is in part a home-grown innovation.

Young people from the mechatronics department in the University of Mosul programmed the system - creating software, connecting tables and building a server for the ‘White Fox’ owners.

Rami Chkib Abdelrahman, owner of the White Fox restaurant, says the idea was borne out of the tedium of lockdown and a desire to bring a taste of the future to the people of Mosul.

“We took three concepts from different restaurants around the world and combined them together: We have a robot that serves food, an interactive table from which the customer can directly send orders to the kitchen, and we decided to eliminate the paper selection menu completely”.

So far, the novelty service has been a hit with locals.

"This is something nice and civilised in the city of Mosul,” said blacksmith and ‘White Fox’ customer, Bashar Mahmud.

“I've travelled abroad and I've never seen anything like this, not in Turkey, Jordan or Saudi Arabia".

“I hope that this idea will be adopted by all restaurants as this is becoming my favourite restaurant in the city of Mosul".

A new ‘bird’ robot from Stanford engineers takes to the skies