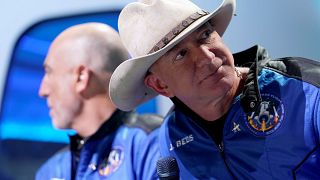 Blue Origin's lawsuit against NASA has been dismissed by a US judge, ending a months-long spat over lunar lander contracts that delayed the space agency's project to land the first woman and first person of colour on the Moon.

In a brief ruling issued on Wednesday, Judge Richard Hertling denied the Jeff Bezos-owned company's complaint that a contract to develop a lunar lander had been unfairly awarded to competitor SpaceX, owned by Bezos' fellow billionaire Elon Musk.

Following the ruling, NASA announced that it would restart work on the $2.9 billion (€2.5 billion) project, which was paused in August as a result of Blue Origin's legal action.

Bezos reacted to the ruling on Wednesday, tweeting that it was "not the decision we wanted, but we respect the court’s judgment, and wish full success for NASA and SpaceX on the contract".

How did the disagreement start?

The dispute relates to the procurement process for NASA's Artemis initiative, a project that aims to return humans to the Moon this decade, and after that to Mars.

In April, NASA awarded the contract to develop a new lunar lander to Space X, after a process that saw SpaceX, Blue Origin and Alabama-based space firm Dynetics compete for what was originally expected to be two contracts.

This prompted Blue Origin to file a first complaint with the US Government Accountability Office (GAO) in July, but it was rejected. The GAO ruled that NASA had not violated the regulations and stated that the space agency had the right to select "several winners, a single winner, or no winner".

'You have been judged'

With Bezos appearing to accept Wednesday's judgement, progress on the Artemis initiative appeared clear to restart.

In a statement, NASA said it would resume work with SpaceX "as soon as possible".

SpaceX CEO Musk responded in his own way, tweeting a reaction photo of the comic book character Judge Dredd.

Despite the setback for Blue Origin, NASA left the door open for private companies to participate in the Artemis initiative in future.

"NASA continues working with multiple American companies to bolster competition and commercial readiness for crewed transportation to the lunar surface,” the agency said.

"There will be forthcoming opportunities for companies to partner with NASA in establishing a long-term human presence at the Moon under the agency’s Artemis programme, including a call in 2022 to US industry for recurring crewed lunar landing services".