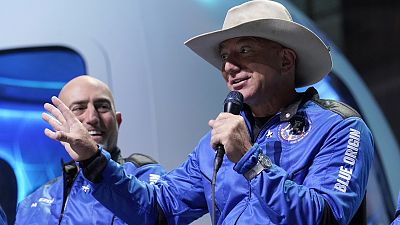 A US government agency rejected a protest on Friday by Blue Origin and defence contractor Dynetics Inc over NASA's decision to pick a single lunar lander provider.

The companies challenged the awarding of a $2.9 billion (€2.5 billion) contract to SpaceX for the lander, arguing NASA was required to make multiple awards.

The US Government Accountability Office (GAO) said it "denied the protest arguments that NASA acted improperly in making a single award to SpaceX".

It had contended NASA gave SpaceX an unfair advantage by letting it revise its pricing. Dynetics, a unit of Leidos Holdings, also did not immediately comment.

On Monday, Bezos offered to cover up to $2 billion (€1.7 billion) in NASA costs if the American space agency awarded Blue Origin a contract to make a spacecraft designed to land astronauts back on the moon.

In April, NASA awarded rival billionaire entrepreneur Elon Musk's SpaceX a deal to build a spacecraft to bring astronauts to the lunar surface as early as 2024.

In a letter to NASA Administrator Bill Nelson, Bezos said Blue Origin would waive payments up to $2 billion (€1.7 billion), and pay for an orbital mission to vet its technology.

"Without competition, NASA's short-term and long-term lunar ambitions will be delayed, will ultimately cost more, and won't serve the national interest," Bezos added.

Before choosing SpaceX, NASA sought proposals for a spacecraft that would carry astronauts to the lunar surface under its Artemis program to return humans to the moon for the first time since 1972.

Bezos' offer came six days after he flew alongside three crewmates to the edge of space aboard Blue Origin's rocket-and-capsule New Shepard.