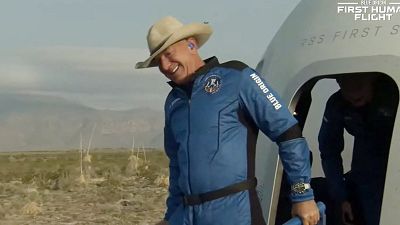 The complaint, filed in the US Court of Federal Claims on Monday, escalates the company’s campaign to try and overturn NASA’s decision to award SpaceX the sole contract to build a vehicle to land astronauts on the moon.

"Blue Origin has filed a complaint with the United States Court of Federal Claims," a spokesperson said in a statement to AFP, calling the decision "an attempt to correct flaws in the procurement process".

"We firmly believe that the problems identified in this acquisition must be remedied to restore impartiality, create competition and ensure America's safe return to the moon,” the spokesperson added.

How did the battle begin?

In April, NASA awarded SpaceX a lunar lander contract worth around $2.9 billion (€2.4 billion). SpaceX, Blue Origin and Alabama-based space firm Dynetics were competing for what was expected to be two contracts.

Blue Origin filed a first complaint to the US Government Accountability Office (GAO) in July, but the GAO rejected it. It ruled NASA had not violated the regulations and stated that the space agency had the right to designate “several winners, a single winner, or no winner”.

Blue Origin said in response that the GAO was unable to respond to the "fundamental problems" of NASA’s decision, due to its limited jurisdictional power.

How has Elon Musk reacted?

Last week, Blue Origin put out an infographic that claimed SpaceX’s Starship is “a launch vehicle that has never flown to orbit and is still being designed”.

“The sad thing is that even if Santa Claus suddenly made their hardware real for free, the first thing you’d want to do is cancel it,” Musk tweeted in response.

The new complaint to the US court could put NASA’s ambitious aims on pause to send American astronauts back to the Moon in 2024, including the first woman.

NASA said in a statement on Monday it had been notified of the court complaint and officials were “currently studying the details”.

"As soon as possible, the agency will provide updated information on the way forward to return to the moon as quickly and as safely as possible," NASA added.

How safe is SpaceX's all-civilian mission?