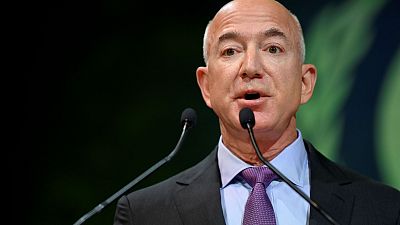 Amazon founder Jeff Bezos has pledged $2 billion (€1.7 billion) towards "restoring nature and transforming food systems" during a speech at the UN's COP26 summit in Glasgow.

Bezos, whose net worth grew by $75 billion (€64.6 billion) last year, said his July trip to space had shown him that the natural world was "so finite and so fragile".

"I was told that seeing the Earth from space changes the lens through which you see the world. But I was not prepared for how much that would be true," he told delegates.

"Looking back at Earth from up there, the atmosphere seems so thin. The world is so finite and so fragile. Now in this critical year, and what we all know is the decisive decade, we must all stand together to protect our world".

Half the money pledged on Monday would go towards landscape restoration in Africa and the United States, the multi-billionaire's Bezos Earth Fund said in a statement.

The rest would be spent on reducing the carbon footprint of food production and cutting food waste, it said.

The $2 billion would be handed out by 2030, the Bezos Earth Fund added.

Bezos, currently the second-richest person in the world, made his money after founding the online retail giant Amazon in 1994. He stepped down as the company's CEO in July.

In 2020, Amazon's business activities emitted 60.64 million tonnes of carbon dioxide, according to company figures. That represented a 19 per cent year-on-year increase from 2019, the company said.

In his remarks, Bezos said Amazon's "Climate Pledge" committed the company to becoming carbon neutral by 2040.

"Amazon aims to power all its operations with 100 per cent renewable energy by 2025, and is working to convert its delivery fleet to electric vehicles," Bezos said.

City heat: How the UN plans to cool down our rapidly warming cities