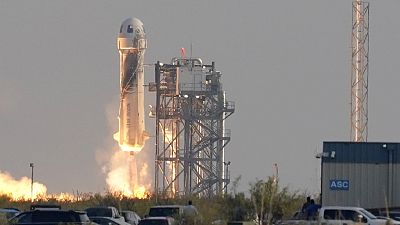 The mission - Blue Origin's 16th - was the company's first to launch with passengers on board.

When did Bezos leave Earth?

The American billionaire's 10-minute voyage to the edge of space departed from Blue Origin's Launch Site One facility roughly 32 km from the rural Texas town of Van Horn.

Named after America’s first astronaut, the New Shepard rocket soared from remote West Texas on the 52nd anniversary of the Apollo 11 moon landing, a date chosen by Bezos for its historical significance.

After successfully landing in the desert in west Texas after his 10-minute space flight, Bezos said it was the "best day ever".

Who were the other crew members?

The NS-16 launch made history, carrying both the oldest and youngest people ever to travel to space.

Also on board was 82-year-old aviation pioneer Wally Funk, one of the so-called Mercury 13 group of women who trained to become NASA astronauts in the early 1960s but was passed over because of her gender.

Daemen, Blue Origin's first paying customer, paid an undisclosed sum for Tuesday's flight. He is set to attend the University of Utrecht in the Netherlands to study physics and innovation management in September. His father heads investment management firm Somerset Capital Partners.

How high did they fly?

While Richard Branson was the first billionaire in space, Bezos and crewmates will go further – 100 km for Blue Origin compared to 86 km for Virgin Galactic.

The two have traded barbs over whether or not Branson's effort counted as a space flight.

That's because there are different definitions of where space begins.

The Kármán line sets the beginning of space as 100 kilometres above Earth's mean sea level. The Kármán line was defined in the 1960s by the Fédération aéronautique internationale.

However, the United States Military and NASA set a lower limit of roughly 80 km, meaning in their view passengers on Virgin Galactic count as astronauts.

Unlike Branson’s piloted rocket plane, Bezos’ capsule was also completely automated and required no official staff on board for the up-and-down flight.

What did Bezos say before the launch?

Speaking to US TV network Fox Business on Monday, Bezos said, "I am excited, but not anxious. We'll see how I feel when I'm strapped into my seat.

"We're ready. The vehicle's ready. This team is amazing. I feel very good about it. And I think my fellow crewmates feel good about it, too".

Bezos has also addressed critics who say that rather than spending billions on "joyrides" into space, Earth's wealthiest men should put their riches to work solving issues like climate change.

"Well, I say they’re largely right. We have to do both,” Bezos told CNN on Monday.

“We have lots of problems here and now on Earth and we need to work on those, and we always need to look to the future. We’ve always done that as a species, as a civilization. We have to do both".

Rewatch the launch of the New Shepard flight in the media player above.