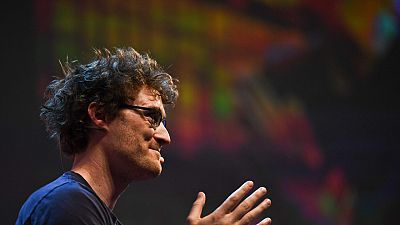 The technology world has descended into Portugal’s capital Lisbon for the 2021 edition of the Web Summit.

Making a comeback from the pandemic, the event has exceeded organisers’ expectations with all 40,000 tickets sold.

Climate and crypto are the key themes of the four-day event.

Euronews Next caught up with Paddy Cosgrave, CEO of the Web Summit, to see what we can look forward to this year.

How does feel to be back this year in the physical space?

It's unbelievable. As the organiser of Web Summit, there were moments over the last two years where we wondered would we ever get back to organising an event? And here we are with tens of thousands of people joining us from all over the world.

What are this year’s themes?

There are some dominant themes. Facebook's whistleblower, Frances Haugen, is topping the bill on the opening night. We'll also hear from Nick Clegg from Facebook as well.

There are two things that are dominating climate and crypto. There are over 200 climate focussed start-ups here. Some of them are not small companies. Some of them are very fast-growing companies. And the other ‘C’ is crypto. The more than 200 start-ups exhibiting, speaking in that space and opening night, the founder of Sorare, probably the most important NFT platform.

COP26 is going on at the same time, how will the events be different on climate?

At the same time, in parallel, you have many of the companies behind the innovations that will hopefully move the planet in the direction we desperately need to be going. Irrespective of what rules get introduced, many of the companies on stage at Web Summit are just driving forward any way towards a kind of carbon-neutral future. That said, I really hope at COP26, the politicians and the large polluters come to some sort of agreement.

Which speakers are you excited about hosting?

Well, there are lots of exciting speakers, I'm maybe a bit of a traditionalist. The web itself was created by Tim Berners-Lee many moons ago. At this point, it seems, you know, it's like in internet terms or web terms. Centuries ago, Sir Tim created the web at CERN, and he's back to close out the event to talk about the future of the web. And a lot of that is around decentralised protocols. And for a lot of the kind of crypto buffs that are attending, that's a talk. They'll all be there in there in their droves. He's sort of the messiah or godfather type figure within the web.

It's a great place to have an event in November. Glasgow in November, oh gosh, you've got to be in Lisbon

And which start-ups are you excited about this year?

I couldn't possibly pick a favourite, but I think some of the growth stage companies in the climate space kind of impact Start-Ups are going to, in some cases, have a profound impact on the world, irrespective of whether they rewrite the rules at COP26 this week or next week. Many of these companies will still go on to have a profoundly positive impact on our world, and I think that's fantastic.

How does it feel to see Web Summit develop from a small event in Ireland to a big one in Portugal?

It started about over a decade ago with 150 people in Dublin. And now it's just at a scale that I don't think any of us could have comprehended. It represents, I think, the explosion of technology in all of our lives. It's no longer just this cute thing that's grey and there's a computer and sits in the corner of a room. We're all addicted to our phones and technology in its many forms, touches every aspect of our lives, from our elections to how we consume content. It's no longer the television that's the dominant platform. It's all of these kinds of tech-enabled tools and platforms.

There's so much discussion to be had. There's so much happening and it's all happening so fast that it's propelled Web Summit from this tiny, obscure event, I think a decade ago to something a lot larger and perhaps more significant.

Why did you choose Lisbon?

We chose to move here five years ago. We ran out of space in Dublin. We're now at maximum capacity in Lisbon as well, which is quite unbelievable. We have to build temporary structures everywhere. And we came here for the sun in November. It's a fantastic city.

Since we've arrived, it's kind of gone from almost the forgotten child of Europe to the kind of the hottest kid on the block. There are people moving here from literally all over the world, from every sector, from fashion tech to Hollywood. And it's a great place to have an event in November. Glasgow in November, oh gosh, you've got to be in Lisbon.