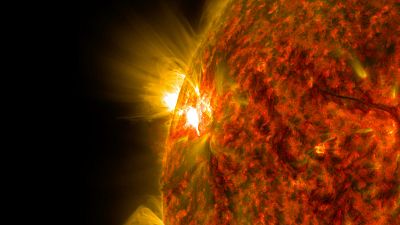 The scenario may seem far-fetched, but the possibility of radiation from the sun affecting electronic systems on Earth becomes ever more likely as digital systems get smaller and smaller.

Now, researchers in Harwell, west of London, are trying to work out the exact impact of solar radiation on digital electronics by simulating particles hitting circuitry and monitoring the effects.

“Cosmic rays create, down at ground level, neutrons, high-energy neutrons and they have energy across a whole energy band, and we simulate that spectrum of neutrons that exist down at ground level but about 1.5 billion times more intense,” Doctor Christopher Frost told Reuters, standing near the end of the beamline at the ISIS Neutron and Muon particle accelerator.

The spikes in radiation caused by solar flares happen almost annually and cause ‘bit flips’ in computer memories, where zeros or ones can be interchanged in the binary code that is critical to the running of every digital device.

“Everything in our digital world is stored by ones and zeros so we clearly don’t want them changing,” Frost said.

Graphics processing units are one area of particular concern when they are used in autonomous cars to process what the car can ‘see’ around it, most importantly, to distinguish between objects, such as people and other cars

“We’ve tested graphical processor units here, and what we’re trying to do is to work out where the problems are, and to allow industry then to find solutions to those problems,” Frost said.

NVIDIA and ARM are just two of the companies who have used the ChipIr instrument to try to make their software more able to cope if or when the next solar super-storm occurs.

“There’s been a lot in the press over the years about solar flares and a lot of doomsday scenarios, but our job is to make sure that you don’t worry about it. Our job is actually for you almost not to notice our work because what we do is to put the solutions in place so, should there be solar flares, then we’ve got the systems that are resilient enough to them,” said Frost.

How Portugal is going green to prepare for the digital transition