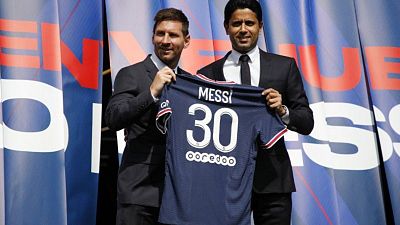 Messi, 34, left Spanish side Barcelona and signed a two-year contract with PSG, with an option for a third year, on Tuesday.

PSG said in a statement the tokens included in his "welcome package", or signing on fee, had been provided by Socios.com who are the club's fan token provider.

The club did not state what percentage of the deal comprised the tokens but said he had received a "large number".

Why did Messi leave Barcelona?

Messi became the most desired free agent in football history after his Barcelona contract expired this summer. The Catalan club had hoped to keep Messi, who agreed to a pay cut, but it still wouldn't have complied with the Spanish league's financial regulations.

Funded for a decade by Qatari sovereign wealth, PSG is one of the few clubs in the world that could finance the signing of Messi. He is set to earn around €35 million net annually, a person familiar with the contract negotiations told the Associated Press.

What are fan tokens?

"Fan Tokens and Socios.com play an increasingly prominent role across sport at the very highest level," said Alexandre Dreyfus, CEO of Socios.com, in a statement.

Fan tokens are a type of cryptocurrency that allows holders to vote on mostly minor decisions related to their clubs. Among the clubs to launch tokens this year are English Premier League champions Manchester City and Italy's AC Milan.

Like Bitcoin and other digital currencies, fan tokens can be traded on exchanges. They also have a tendency towards wild price swings, leading some financial regulators to issue warnings to investors.

PSG said there had been high volumes of trading of its fan tokens after reports of Messi's move to the club emerged.

"The hype surrounding the latest signings in the club’s busy summer transfer window created a huge surge of interest in $PSG Fan Tokens, with trading volumes exceeding $1.2 billion in the days preceding the move," it said.

The fan tokens' price moves can have little connection to on-field performance or results.

The signing is also expected to bring a windfall in commercial revenues. Jersey sales alone are likely to rack up huge sums. When Cristiano Ronaldo signed for Juventus in 2018, the club sold 520,000 shirts with his name on the back in the first 24 hours for an estimated $60 million (€51.1 million).

Messi’s signing has also boosted the profile of PSG globally. The club’s Instagram followers jumped from 38.4 million on Saturday to over 44.8 million on Thursday following the confirmation of the transfer, according to social media tracker SocialBlade.

Tesla self-driving under investigation over US crashes