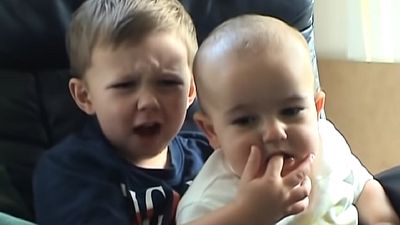 A baby bites his brother's finger and then laughs when he cries out in pain.

It's a simple formula that has racked up almost 900 million views on YouTube since the 55-second clip was uploaded in 2007.

The purchase marks another high-profile addition to Fard's collection. He previously paid over $400,000 (€326,000) for the 'Disaster Girl' meme NFT.

The auction site, hosted on a platform built by blockchain company Origin, invites prospective buyers to bid for the "soon to be deleted YouTube phenomenon," and offers the winner the chance to star in a remake of the original with the two brothers, now aged 17 and 15.

Since putting the video up for sale the Davies-Carr family seem to have had a change of heart, however. The delisted video still appears on YouTube, pending a final decision by Fard on whether or not to delete it.

"Charlie Bit My Finger has been a huge part of the Davies-Carr family's lives for the past 14 years, and they are excited to welcome others to become a part of their story. This is not the end of the beloved video, but rather a new beginning," the family said in a statement.

NFT stands for 'non-fungible token'. They are used to prove ownership of an asset.

NFTs are unique – non-fungible means they are non-interchangeable because they have unique properties.

Each NFT can only have one owner, a record of which is stored on the publicly viewable Ethereum blockchain.

The blockchain is decentralised, meaning that every transaction is verified by thousands of miners who receive the ether cryptocurrency as a reward. This makes it – in theory – very difficult to forge.

There's a drawback to this. Verification uses a lot of computing power and therefore a lot of energy, meaning there's an environmental cost to NFTs.

Meet the buyer of the world's most expensive digital artwork