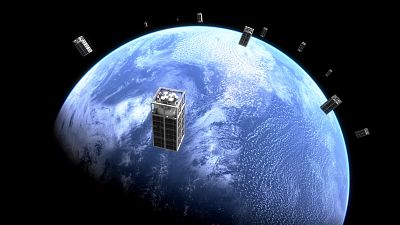 Orbit Fab is working to create an in-space market for products and services starting with fuel stations   -   Copyright  Photo supplied by Orbit Fab
The opinions expressed in this article are those of the author and do not represent in any way the editorial position of Euronews.
By Daniel Faber  •  Updated: 15/02/2022

You wake up, grab your zero-gravity brewed coffee and head out to your asteroid mining job. You gaze out the window on your way to work and see a network of fuel tankers and shuttles seamlessly moving about and docking with each other. You feel at home, surrounded by comforting staples of society: restaurants, sports, and businesses that now all operate in orbit.

Humans have always had a strong desire to explore which has helped us survive. For example, communities have relocated when one side of a mountain is covered by a volcanic eruption or is flooded.

From a long-term perspective, getting people off Earth is necessary for humanity to survive. As a bonus, it will enrich humanity with incredible new experiences and new outlets for our creativity.

Though space is currently deserted except for a few humans in the International Space Station, the future I’ve described is just a few decades away.

Today, the "off-Earth" environment is viewed as inhospitable and formidable. To begin the settlement of space, we must create the first permanent job. Crossing that threshold requires overcoming a complex convergence of advanced technologies and new business models.

Very soon every industry operating on Earth will end up operating in space.

The foundation for creating a permanent job in space is a bustling in-space economy. The harshest environments on Earth have become people’s homes once there are jobs.

Only a few 'export jobs' are needed to kick-start a local economy. Look at the city of Los Angeles, once built on mining gold and oil before exploding into the cultural hub it is today.

For this to happen in space, we need to identify what’s needed and what’s going to make money. A few years ago the only space exports under development were tourism and mining. Now entrepreneurs are working on in-space manufacturing and even entertainment (there is a race between Russia and America to shoot the first movie in space, for instance).

That’s where we want to get to. But how do we create the first permanent job in space to make this vision a reality?

Mining asteroids and the moon

Technology brings down the cost of creating things and business models bring in money so we need a convergence of the two. When I was CEO at Deep Space Industries, a company I co-founded before Orbit Fab, we investigated mining asteroids and whether the revenue from exporting metals mined in space could keep someone permanently employed up there.

Therefore, we believe the first job would likely be repairing the complex mining and processing machinery. We successfully developed technology to do this, now it’s also necessary to create markets that need this machinery.

Asteroids and the moon contain lots of materials, however, there is a misconception that gold or other precious metals will be the most lucrative. That’s not the case. When we ran the numbers, we found the best product to mine and sell is actually satellite fuel for use in orbit. I co-founded Orbit Fab to build this market.

The first technologies we need for delivering fuel in orbit are a fuelling port and a satellite docking system. We made the Rapidly Attachable Fluid Transfer Interface (RAFTI) which has fuel ports and gripping 'fingers' to support guidance and docking.

In June this year, the world’s first fuel depot - Tanker-001 Tenzing - was launched. In 2022, we expect to see the first fuel delivery. With fuel available anytime and anywhere in space, there will be a huge increase in mission flexibility and spacecraft longevity, allowing the industry to grow.

It’s going to be much better to make the propellant once we’re in space because it reduces the need for so many rocket launches. For example, Rice University’s Wang Group recently developed technology for efficiently producing hydrogen peroxide from water.

Peroxide is the only clean, high-fuel-efficiency, and storable monopropellant (it burns with itself, leaving water and oxygen) and oxidizer can be made from material mined on the moon or from asteroids.

Ultimately we will turn simple raw materials like water and carbon into a range of propellants: on-demand and on-location.

A bedrock for innovation

To unlock the potential, we need permanent jobs in space so we can start experimenting hands-on. This means bootstrapping more industries and more technology that operate there. This virtuous cycle inevitably flows back to benefit Earth. Soon, your home microwave might have a gismo made in space because it couldn’t be made anywhere else.

Refuelling is a necessary step to achieve this future. It’s the bedrock for mining and manufacturing innovation. Some companies will get there first and inevitably become the biggest companies of the coming century, just like General Electric (GE) and Siemens did with electricity or Microsoft and Google with computers and the Internet.

There is so much opportunity from the technology we can make today. I encourage all of you to participate in that discovery.