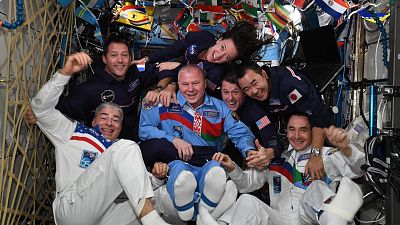 The Tokyo 2020 Olympic Games ended on Sunday and the Paralympic Games don't begin until August 24. What's a sports fan to do?

Luckily, the astronauts onboard the International Space Station (ISS) have the answer: the first-ever Space Olympics.

The seven astronauts divided themselves into two teams – Team Soyuz and Team Dragon – named for the spacecraft that brought them to the ISS.

"We had all flags of the world (yes, every single country) hung up on the ceiling of the lab which gave an inspiring (and colourful) backdrop to our athletic prowess (or lack of)," Pesquet said.

So, which team took home the (Space) Olympic gold?

The lack-of-floor routine saw the spacefarers doing the kind of backflips Earth-bound gymnasts can only dream of.

However, special mention goes to Russian cosmonaut Pyotr Dubrov for finishing off his zero-gravity performance with a mid-air Superman pose. That's a Team Soyuz win in our book.

No-handball is the sport you didn't know you loved. The two teams competed to score goals by steering a ping pong ball through a hatch with their breath.

Fortunately for the astronauts, the ISS isn't full of water. Even more fortunately, you don't need water to swim in space.

Both teams put in strong performances, but the Euronews Next gold medal has to go to Team Dragon's Megan McArthur and Shane Kimbrough from NASA, JAXA astronaut Aki Hoshide and ESA astronaut Thomas Pesquet for their stunning display of mid-air forward flips.

The deciding event saw the two teams show off their marksmanship as they fired giant rubber bands at a target.

As Tokyo handed the Olympic flame to Paris on Sunday, Aki Hoshide from Japanese space agency JAXA and Frenchman Pesquet unfurled the official flag of the Paris 2024 Games.

The seven spacefarers took part in the Space Olympics on their day off, after a long week of carrying out scientific experiments on the ISS.

Over 200 experiments are planned during ESA astronaut Pesquet's time in space, with 40 European ones and 12 led by the French space agency CNES, the ESA said.

One upcoming "educational experience" will see Pesquet guide some 350,000 French schoolchildren as they investigate a 500 million year-old single-cell organism known simply as "Blob".

As Pesquet moistens his Blobs, the students will do the same in their classrooms. Live sessions will then start in order to be able to compare its behaviour with and without gravity.

Smoke alarms go off at the International Space Station