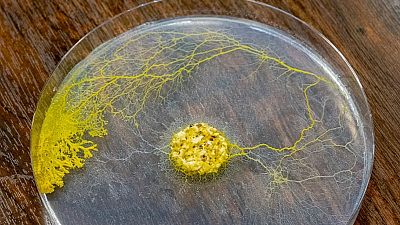 Cultures of Physarum Polycephalum, better known as "Blob", an organism capable of learning despite its lack of a brain.   -   Copyright  CNES/DE PRADA Thierry, 2021
By Julie Gaubert  with AFP  •  Updated: 17/12/2021

All manner of objects have been sent into space; from a rubber duck sporting the England football team’s badge to a €6,000 bottle of French wine.

Now the International Space Station is preparing to welcome another a-typical tenant.

Meet "Blob," an unclassifiable organism that will fly into orbit on Tuesday to be the subject of an educational experience organised by French astronaut Thomas Pesquet.

Better known as "slime mould," Blob appeared on Earth over 500 million years ago, way before animals began colonising the land.

While it was considered to be a fungus for a long time, it was ousted from this category in the 1990s to be reclassified as part of the amoebozoa family, of which the amoeba is also a member.

Blob, or Physarum polycephalum as it is known, is made up of only one cell and several nuclei. A spongy yellow mass in appearance, it is devoid of a mouth, brain and legs. And yet it eats, grows, moves (albeit very slowly), and has amazing learning abilities.

The creature can also divide at will and become dormant (without dying) when dehydrated. It is in this state - when it is a hardened mass called a "sclerotium" - that several pieces of Blob will be launched into space by the European Space Agency (ESA) onboard an ISS refuelling freighter.

When Pesquet rehydrates them in September, four sclerotia of about 0.5 cm in size will wake up in Petri dishes 400 km from Earth.

The goal is to observe the effects of weightlessness on this organism compared with those being tested by students on Earth.

Over the course of two controlled experiments, the astronaut will monitor the behaviour of unfed Blobs while the lucky ones will be provided with a food source, oatmeal.

"Today, nobody knows what behaviour it will have in microgravity," Pierre Ferrand, one of the initiators of the project and biology teacher at CNES, explained.

"In which direction will it move: will it take the third dimension by going upwards, or towards the oblique?"

On Earth, thousands of Blob specimens - all cut from the same strain (LU352) as those blasted into space - will be distributed to 4,500 primary schools, secondary schools and high schools in France.

Schools have responded overwhelmingly to the call to take part in the project.

"Initially, we had planned to provide 2,000 classes. But faced with the flood of registrations, the CNES and the CNRS made a financial effort to meet the 4,500 requests," Christine Correcher, Educational projects manager at the French space agency, said.

"This represents more than 350,000 students who will touch the Blob!" she added.

At the end of August and beginning of September, teachers will receive a kit containing between three and five sclerotia prepared by Audrey Dussutour's team, along with a tutorial to conduct the experiment.

As Pesquet moistens his Blobs, the students will do the same in their classrooms. Live sessions will then start in order to be able to compare its behaviour with and without gravity.

The experiments could also shake the foundations of other scientific theories.

"For example, in cell theory, one of the oldest, we say that every cell divides into two cells. With the blob, it does not work that way, since it is a single cell that grows without ever dividing itself," Ferrand said.

Curiously, Blob is a biological oddity in other respects, too.

"When most organisms use two sexual types, the blob has more than 720! It is an organism which tells us that life is made of a multitude of original features," the professor added.