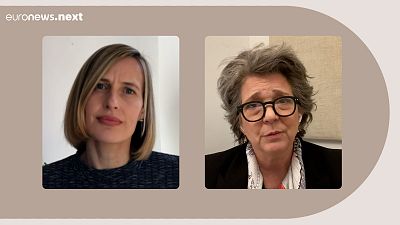 Madonna Badger, the founder and Chief Creative Officer at New York-based advertising agency Badger & Winters, is a trailblazer in her industry.

She is the creative force behind the #womennotobjects digital campaign, a movement that seeks to upend the objectification of women in advertising campaigns.

Badger says her agency's work is changing the industry and influencing global awards and events, such as Cannes Lions.

She grew frustrated, she told Euronews Next, in the way women were continuously portrayed in campaigns selling everything from hotdogs to perfume.

"And so we made this film Women, Not Objects. And it, you know, what became viral overnight".

When you see an ad, and you are a guy and you say how would I feel if that was my daughter or my mother or sister?

So, how do you know if an ad is objectification or just provocative art?

"When you see an ad, and you are a guy and you say 'how would I feel if that was my daughter or my mother or sister?'" Badger explained.

Euronews Next spoke with Badger about her vision for girls and women, the future of leadership, and what sort of legacy she wants to leave behind.

The Changemakers series in partnership with Cannes Lions Live and Euronews Next is a one-to-one interview series with female leaders who are rethinking their roles and creating a better future for their industry.