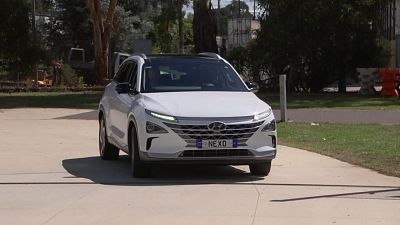 As the world searches for ways to climate-proof the auto industry of the future, many are turning their attention to hydrogen-fuelled vehicles.

As an alternative to electric cars, they boast faster refuelling times and have a far greater range of around 600 km, roughly equivalent to that of a petrol-powered vehicle when the tank is full.

At present, the infrastructure for refuelling these vehicles is both costly and prohibitively limited. But in Australia, progress is being made on both these fronts to boost the numbers of people choosing more eco-friendly hydrogen cars.

In March, the Australian Capital Territory (ACT) government unveiled the only publicly available hydrogen refuelling station in the country which will service their new fleet of 20 hydrogen-powered cars.

The site in Canberra uses renewable energy to generate hydrogen for use as fuel.

At the start of May, the station officially received its zero carbon certification from the Smart Energy Council.

Certified by carbon accounting auditors, it is only the second hydrogen fuel station in the world to receive it following a similar venture in Halle, Belgium.

We're going to be using hydrogen for transport, in cars, in trucks, in trains, in ships. Hydrogen is going to be part of our economy. This today is part of the future economy.

"This is a starting point,” the ACT’s Emissions Reduction Minister Shane Rattenbury said.

Partners in this project are optimistic that the new station will encourage more people to opt for hydrogen, leading to more filling stations which in turn will help drive down the price of the technology.

It’s a bet that Alan Finkel, Australia’s former Chief Scientist, believes will be an essential component of the country’s green future.

“We're going to be using hydrogen for transport, in cars, in trucks, in trains, in ships,” said Finkel. “Hydrogen is going to be part of our economy. This today is part of the future economy”.

Arrival of hydrogen-powered trucks is raising the stakes for Europe