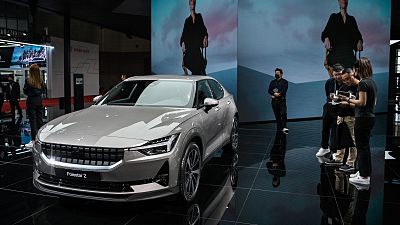 A thousand companies from around the world descended on the 2021 Shanghai Motor Show on Monday with electric cars and intelligent driving solutions taking centre stage.

With the theme of "Embracing Change," this year's event will run until April 28 and is taking place under strict virus controls.

It is hoped the show will propel a sales comeback for the auto industry following multibillion-dollar losses sustained over the course of the pandemic.

"We have with the Polestar 1 and the Polestar 2, two cars which are so emotionally appealing, they're so rewarding, that we believe that that type of offer will draw many, many people into electrification," Polestar CEO, Thomas Ingenlath, said.

Sales of electric vehicles have almost tripled in China in the first three months of 2021 compared with 2020.

According to Tao Gao, who manages Great China Light Vehicle Production Forecasting at IHS Markit, electrification is the ultimate goal of the auto industry.

"In the short term, we think that on the one hand, the new energy market will rely on government support. And on the other hand, it'll need to be driven by capital in the market," he said.

"As the auto industry is changing and the consumption structure is upgrading, telecommunication technology and the internet and automakers are deeply integrating," he said.

"The integration and innovation, which cover different sectors and industries, will be a key feature of the new energy cars industry in the future".

Go behind the scenes at the Shanghai Motor Show in the media player above.