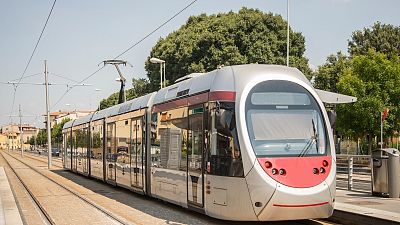 The tram system in Florence is being used as a testing ground for smart transport solutions of the future.   -   Copyright  Getty Images via Canva
By Euronews  •  Updated: 03/06/2021

Smart trams have taken to the streets of Florence as part of an experiment to improve mobility and sustainability in the Italian city.

The trams are part of the EU-funded ELASTIC project, which is working on systems that would provide improved real-time location information and hazard detection.

Three trams have been fitted with sensors including cameras, inertial measurement units (IMUs) – which measure the speed and orientation of a vehicle – and LIDAR, which measures proximity to a given object.

Three tram stops in the city have also been fitted with data collection, communication and computing devices to ensure the flow of accurate data. The project aims to give an early indication of how the smart cities of the future could function, with sustainability and pollution reduction at their heart.

For Eduardo Quiñones, coordinator of ELASTIC and senior researcher at the Barcelona Supercomputing Centre, the goal is to offer future city dwellers an alternative to private self-driving vehicles.

"Busy urban spaces are in need of innovative transport solutions and smart city applications," he said.

To achieve this, he believes it is essential to make "transportation more agile, with flexible routes depending on the needs of both individuals and of what's going on in the city. Data is fundamental".

The experiment taking place in Florence is working on the creation of so-called "smart zones," combining data from the tram lines, city streets and pedestrian crossings.

Making cities more sustainable is at the heart of the project.

How would it do that? The main aim is to cut down on the use of private cars – as even electric vehicles have an environmental impact, thanks to the materials their batteries are made from.

The project also hopes to limit pollution in another way, by making the computers that power intelligent transport systems more efficient.

The next step for ELASTIC is a smart tram system that knows where the trams are, whether there are obstacles on the line or at stops, and to track the movements of people and vehicles.

But the decentralised nature of the system poses problems.

"There are different computer nodes that have to coordinate in order to produce a common response. It's a challenge that the technology needs to address. It's necessary to have [the data] in real time," Quiñones said.

ELASTIC aims to reduce the number of tram-related accidents in Florence by a quarter, to improve the city's traffic flow by five per cent and to reduce the transportation system's maintenance costs by 30 per cent.