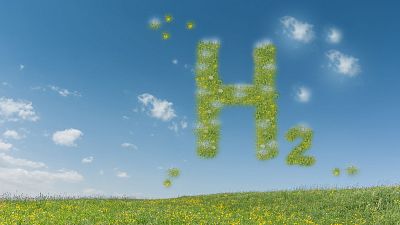 As the European Union gets to work on climate ambitions that aim to encourage companies and consumers to choose greener options, the bloc and the energy industry are hedging their bets on hydrogen.

But could clean hydrogen be the answer to achieving climate neutrality?

Clean hydrogen, or green hydrogen, is made without fossil fuels and uses electricity from renewable energy technologies. But it is also the most expensive way to produce the gas and the cost is proving a hurdle.

Currently, the most used way to produce the gas is through what is called ‘grey hydrogen’ but it is one of the most polluting methods. It works by using natural gas through steam methane reformation but the emissions are not captured.

Clean hydrogen will be indispensable in helping decarbonise sectors such as industry, heavy-duty transport, and seasonal storage, according to a report by Hydrogen4EU, a research partnership made up of international organisations and energy giants.

But the report makes clear that it is not the silver bullet to solve the entire climate problem. Instead, it is the missing link for sectors that cannot be easily decarbonised through electrification.

Oil and gas companies and governments have also hailed clean hydrogen as the gas of the future, which could help Europe reach its goal of reaching net-zero carbon emissions by 2050.

The European Commission unveiled its Fit for 55 climate package on July 14, which included some of the bloc’s most ambitious proposals to reduce carbon emissions and wean the EU 27 off fossil fuels.

I think what we also acknowledge is that the amount of infrastructure you need for this green hydrogen is really gigantic.

Part of the draft proposals to achieve this is by giving a significant boost to the development of the European hydrogen industry.

As such, it details a plan for a 50 per cent target share in hydrogen consumption in the industry sector. It has also set itself an ambitious target of 10 million tonnes of renewable hydrogen to be produced in the EU by 2030 and for hydrogen refuelling stations to be more widely available.

What will be the cost of implementing cleaner hydrogen?

The challenge of clean hydrogen is getting the cost down to compete with fossil fuels.

“I think what is really important at the moment is you can't make money with hydrogen projects because clean technologies are more expensive than dirty technologies,” Johannes Trüby, Director of Economic Advisory Energy and Modelling at Deloitte and one of the authors of the report, told Euronews Next.

“As soon as the regulatory frameworks are in place for companies to be able to break even, then hydrogen projects will come, and then you'll get the costs down.”

He said the profits will then come in turn, but that for the moment it is impossible to put a price on how much the clean hydrogen industry could be worth.

“I think what we also acknowledge is that the amount of infrastructure you need for this green hydrogen is really gigantic.”Deloitte’s Johannes Trüby, one of the authors of the report, told Euronews Next.

But even if producing green hydrogen can be more cost-effective, the Hydrogen4EU report says it will not be sufficient to meet all future clean hydrogen demand.

But that would have to increase tenfold as the EU has installed 120 GW of photovoltaics and 170 GW of wind power in total.

He estimates developing hydrogen structures could cost Europe around €1.3-1.5 trillion, which would encompass the installations for hydrogen production, shipment, storage, and pipelines.

Another way to boost clean hydrogen would be to scale up blue hydrogen production, which is made from natural gas and subsequent carbon capture and storage (CCS).

By 2040 the hydrogen can be transported basically from east to west, from north to south and vice versa across Europe.

It is considered low carbon as it buries the related CO2 emissions underground. But environmental groups and some EU members are hesitant as it is not as clean as green hydrogen.

But the Commission and industry experts acknowledge blue hydrogen will be needed to grow the market.

The Hydrogen4EU report advises keeping all options open when it comes to hydrogen production and argues a technologically diverse model brings down the cost of building a low-carbon hydrogen value chain by €2 trillion by 2050.

Europe wants to be a world leader in the clean hydrogen market and is in a strong position to do so, argues Noé van Hulst, Hydrogen Advisor at the International Energy Agency (IEA) and advisor at Gasunie, a Dutch gas company.

"We will need to have a policy where you re-purpose the gas pipelines," van Hulst told Euronews Next.

"Then you can transport clean hydrogen from the supply sources to the demand centres, which may be further away, but luckily enough, we can do that by repurposing gas pipelines".

He said Europe has, fortunately, already acknowledged this eventuality and that European gas infrastructure companies have designed the so-called hydrogen backbone plan, whereby in the next decades and already in the next five to 10 years, it can be done gradually.

"By 2040 the hydrogen can be transported basically from east to west, from north to south, and vice versa across Europe. And that's what you need to build a really integrated European clean hydrogen market including storage," he said.

Van Hulst predicts in the long-term we will probably see clean hydrogen being traded across the world. But to do so, we will need clarity on which product is traded and what their carbon footprint is.

"There needs to be a respected, solid and trusted certificate market built on this basis. Then clean hydrogen can become a new global commodity market," he said.

The International Partnership For Hydrogen and Fuel Cells is currently working on a methodology on how to calculate how much carbon is being produced for different ways of producing hydrogen.

What is the future of hydrogen?

For the moment, achieving the EU’s plan to produce 10 million tonnes of renewable hydrogen by 2030 is a long way off.

Trüby’s team at Deloitte tracks the different hydrogen projects being announced across Europe and calculates how much hydrogen they could produce once they are running.

He said over the last two and a half years, only one-third of the EU’s 10 million tonne ambition was produced in 2020.

"The supply gap is still quite big. I mean, there are still nine years until 2030 and you might see more projects coming," Trüby said.

"But it just shows that if you take the expectation from the Commission and compare it against what is happening on the ground, there is still quite a significant supply gap".

That said, the uses of clean hydrogen are abundant, including for heavy transport, particularly trucks, as electric vehicles struggle with long-distance and carrying heavyweights. It can also be used for planes and ships.

Hydrogen is also beneficial to heavy industries such as steelmaking, cement, and chemicals.

"It's a subject that touches really upon many of the stakeholders in the energy industry and I think that's why we can expect it to be big," said Trüby.

"How deep it's then going to go, that's a different story. But everybody is talking about hydrogen for exactly those reasons because it impacts everybody".

Why are scientists getting excited about nuclear fusion?