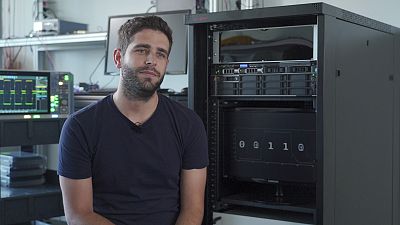 However, quantum random number generators can. We discussed the importance of random numbers and why they're such a challenge with Quside co-founder Carlos Abellán.

"A random number is basically something that a device produces, and we cannot know its value until it has been generated."

"One of the most difficult parts of generating random numbers is basically that a computer is a machine that repeats a few steps we tell it to do, it cannot generate them. It is impossible to generate something that is unpredictable in a computer.

"So, basically, we have to resort to the physical world to make measurements on something that behaves randomly and from there we can extract random numbers.

"But then we have a problem because - what are the processes we can measure that are really unpredictable?

"You can think about flipping a coin. In that case, you flip a coin and the result is random, but the reality is that the randomness of this coin is not intrinsic to the coin, it's our inability to predict its dynamics. In reality, the process is predictable