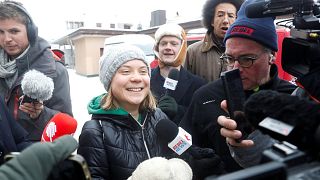 Climate activist Greta Thunberg reacts as she walks with members of the media during the World Economic Forum in Davos (WEF) in Davos, Switzerland   -   Copyright  Reuters
By Charlotte Elton  & Reuters  •  Updated: 20/01/2023

Greta Thunberg has hit reporters with a dose of her signature sarcasm, laughing off mocking questions about her activism.

After a visit to the World Economic Forum in Davos, the 20 year old activist walked around the outskirts of the Swiss ski resort.

She was surrounded by a crowd of journalists, several of whom posed jeering questions.

One reporter said: "It's been quite cold in Davos, when can I expect some global warming?"

Another asked: "Who was filming your arrest in Germany? Because it looked like you did that in several takes, didn't you?"

The reported from Rebel News was referring to Thunberg's detention alongside other activists on Tuesday during protests against the demolition of a village to make way for a coal mine expansion. She was released after an identity check, according to police.

Thunberg answered with a laugh. "It's very likely that the German police and [mine owner] RWE fossil fuel company would stage arrests," she said sarcastically.

What has Greta Thunberg said about the WEF?

The world’s elite descend on the small alpine town to discuss global issues and potential solutions.

But Thunberg expressed pessimism about the WEF's role in climate action.

"It has not led us anywhere specifically good, has it?" she said.

Speaking at a Davos meeting, Thunberg urged International Energy Agency Executive Director Fatih Birol to stop the global energy industry and the financiers who support them from fuelling carbon investments.

Thunberg has joined with other activists to present a "cease and desist" letter to CEOs, calling on them to stop opening new oil, gas and coal extraction sites.