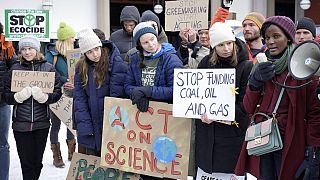 Swedish climate activist Greta Thunberg and other prominent climate campaigners including Vanessa Nakate and Helena Neubauer held a climate march on Friday, the final day of panels at the World Economic Forum in Davos, Switzerland.

Thunberg met with the chief of the International Energy Agency, Fatih Birol, on the sidelines of the convention on Thursday and slammed corporate elites for their inaction.

Leaders at Davos are “fuelling the destruction of the planet” by investing in fossil fuels and prioritising short-term profits over people affected by the climate crisis, she said.

The activists brought a 'cease and desist' letter calling on the heads of fossil fuel companies to stop all new oil and natural gas projects, it was signed by nearly 900,000 people.

Click on the image above to watch the march.

This year's forum was themed 'Cooperation in a Fragmented World' and concluded at lunchtime on Friday after five intense days of presentations and debates. Speakers included the President of the European Commission, Ursula von der Leyen; the Chancellor of Germany, Olaf Scholz; the President of Ukraine, Volodymyr Zelenskyy and the UN's Secretary-General, António Guterres.

This year a record number of world leaders and business experts attended; more than 1,500 public figures from some 700 organisations.

That's it for our live coverage of the World Economic Forum in Davos this year.

Be sure to follow our correspondents David Walsh, Meabh McMahon, Sasha Vakulina and Fay Doulgkeri on Twitter for more updates.

A final word from Greta Thunberg

What did I miss?

Three videos from the WEP to catch up on:

Confused about Davos? Our Euronews correspondents who were onsite all week walk through their experiences covering the World Economic Forum 2023.

Euronews' Sasha Vakulina hosted the panel War in Europe: Year 2. The Prime Minister of Finland, Sanna Marin and the President of Moldova, Maia Sandu were among the panellists.

The European Commission President, Ursula von der Leyen, delivered a speech at the WEF in Davos, Switzerland, which was preceded by a special message from Ukrainian first lady Olena Zelenska.

The President of the European Central Bank (ECB), Christine Lagarde, has warned that inflation continues to be "too high" despite the decline experienced in recent months.

Lagarde lamented that many journalists "emphasise too much in their headlines that inflation has dropped", despite the fact that it is still at very high levels -- the very reason the body that she presides over "maintains its mandate to place it at 2%".

Lagarde pointed out that activity in Europe "is falling compared to 2022" but it is better than expected.

Do we need a new Helsinki Accord?

In the midst of wars and conflicts, the call for a new “Helsinki” is growing louder, can the Organization for Security and Co-operation in Europe (the OSCE) spearhead a new agreement on security dialogue and coordination?

Catch up on this morning's session here.

Young activists call on business leaders, politicians, organisations and governments to democratise debates and find solutions together to the most pressing global challenges. What role can the youth of today play in the global economy?

WATCH: The final session at the World Economic Forum 2023

Closing Remarks: The Road Ahead

Børge Brende, the President of the World Economic Forum will bring this week's panels to a close at 12:00 CET.

Kristalina Georgieva, the Managing Director of the International Monetary Fund

'Time of the Wild West is over,' EU’s Jourová warns Musk from Davos

Delegates at Davos observed a minute's silence for Ukraine