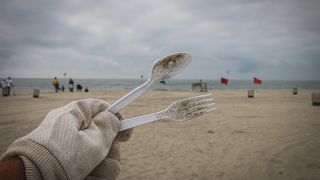 Single-use plastic items including cutlery and plates will soon be banned in England, the government has announced.

Each year, the country uses around 1.1 billion single-use plates and 4.25 billion items of cutlery, according to government estimates. Only 10 per cent of these are recycled.

Now, environment secretary Thérèse Coffey has confirmed that such items will be outlawed in England.

Similar bans are already in place in Scotland and Wales.

‘A plastic fork can take 200 years to decompose’

Plastic objects used for takeaway food and drink - including containers, trays and cutlery - are the biggest polluters of the world’s oceans, studies have shown.

“A plastic fork can take 200 years to decompose, that is two centuries in landfill or polluting our oceans,” says Coffey.

Billions of single-use plastic items are disposed of each year in England, rather than recycled.

The decision comes after a consultation by the Department for Environment, Food and Rural Affairs (Defra) that took place from November 2021 to February 2022.

“I am determined to drive forward action to tackle this issue head on,” Coffey says.

“We’ve already taken major steps in recent years - but we know there is more to do, and we have again listened to the public’s calls.

“This new ban will have a huge impact to stop the pollution of billions of pieces of plastic and help to protect the natural environment for future generations.”

However, some campaigners have criticised the ban for its limited scope.

“Whilst the removal of billions of commonly littered items is never a bad thing - this is a very long overdue move and still a drop in the ocean compared to the action that's needed to stem the plastic tide,” tweeted Megan Randles, a political campaigner at Greenpeace UK.

What items will be included in England’s single-use plastic ban?

The government is yet to release details of the single-use plastic ban.

On Saturday, more information will be announced about the objects included and where the ban will apply.

The ruling will cover plastic plates, bowls and trays used for food items consumed in a restaurant or cafe, the Daily Mail reports, but not in environments like supermarkets and shops.

What other European countries have banned single use plastic?

A similar ban has already been introduced in Scotland and Wales. In England, single-use plastic straws, stirrers and cotton buds were outlawed in 2020.

Green campaigners in England have criticised the government’s delay in bringing in the new measures.

The country lags behind the EU, which introduced a ban on single-use plastic items in 2021. The ruling prohibits the sale of common pollutants including straws, plastic bottles, coffee cups and takeaway containers on EU markets.

Although not in the EU, Norway also adopted the measures.

Further proposals have recently been made to ban miniature hotel toiletries, among other items, as part of the European Green Deal’s fight against packaging waste.

In Germany, plastic manufacturers will have to begin paying towards litter collections in 2025.