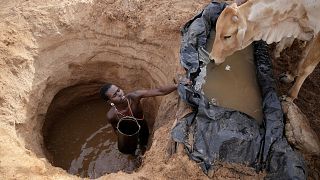 Generations of East Africans have tapped groundwater in the desert to survive in parched lands as droughts are worsening due to climate change.   -   Copyright  AP Photo/Brian Inganga
By Rosie Frost  & David Walsh  •  Updated: 20/01/2023

“To be resilient to climate change, any community must have a sustainable source of water.”

Half of them have water as an underpinning issue, according to Wainwright.

We’re not doing enough to adapt to climate change

At international meetings like Davos, there is often a lot of focus of reducing greenhouse gas emissions but not as much on learning to live with climate change.

“When I come here, I’m always slightly frustrated because although it’s incredibly important to slow down climate change, we’re not doing enough to live with it, to adapt to it,” Wainwright adds.

WaterAid works in some of the poorest communities in the world, where the impact of climate change is being felt the most. He says we have recently seen just how big of an issue water is with last year’s devastating flooding in Pakistan and droughts in East Africa.

These communities that have done the least to cause climate change are being hit the hardest.

But there are plenty of opportunities to invest in ensuring that they can cope. Groundwater - water reserves found underground in rock and soil - is just one.

These underground water reserves are not currently being used but could provide five years - or in some cases up to 20 years - of protection against drought. What is needed is action to map where this groundwater is, drill sustainable wells and maintain water systems.

Wainwright says that every day people write to him with new ideas of how to take water out of the air or new approaches to desalination.

“They’re occasionally useful but most of the time with water, there’s a chronic lack of investment and the other things you need to have around it [like] good political will and regulation to make it happen,” he explains.

What would be really useful, Wainwright says, is more innovative sources of finance. Currently, just 9 per cent of investment in water in developing countries comes from the private sector.

In the energy sector, that figure is 45 per cent.

“The levels of investment required to make the world resilient to climate change in the water area are in the trillions. So the only place that money is going to come from is the private sector.”

Watch the video above to learn more about water and climate change.