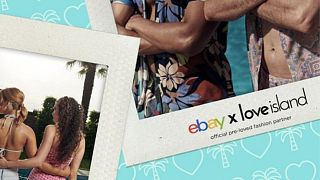 Hit UK reality TV show ‘Love Island’ is back on 16 January - and pre-loved fashion is set to steal the show once again.

In 2022, the series ditched its fast fashion image by partnering with eBay, having previously been associated with e-commerce clothing stores Missguided and I Saw it First.

The series is widely viewed in the UK with audience figures in the millions and offers brands unparalleled exposure during its primetime slot.

Series 8 of 'Love Island' saw the first ever pre-loved fashion partnership on a TV show. Clothing from eBay's online second hand marketplace was worn by contestants as they descended on an exotic location to find love.

Searches for ‘pre-loved clothing’ soared by 1,600 per cent on eBay after the show aired.

New data from eBay reveals that demand is still strong, with 49 per cent of Brits planning to buy pre-loved fashion in 2023. Those aged 18 to 34 are most open to buying second hand clothing, with 74 per cent planning to do so compared to 31 per cent of over 55s.

For season 9, 'Love Island' has once again teamed up with eBay to drive conversations on sustainability and encourage shoppers to be more eco-conscious about their wardrobes.

Why is pre-loved fashion growing in popularity?

Clothes and footwear are responsible for water pollution, greenhouse gas emissions and landfill. With the rise of fast fashion, the quantity of clothes being produced and thrown away has skyrocketed.

Shopping for pre-loved items saves both money and the environment. 50 per cent of survey respondents said they shopped second hand because it's cheaper, while 48 per cent cited environmental reasons.

eBay estimates that if every shopper bought one pre-loved fashion item instead of buying new in a month, the UK could divert 6,000 tonnes from disposal - the equivalent to over 260,000 filled suitcases.

In the EU, of the 5.8 million tonnes of textiles that consumers discard every year, only a quarter is recycled according to the European Commission. Friends of the Earth Europe reports that the remaining 4.3 million tonnes are dumped. That's equivalent to 60 garbage truckloads of clothes being burned or buried in landfill every minute.

How will pre-loved clothing feature in 'Love Island' Series 9?

Islanders will be dressed by celebrity stylist Amy Bannerman, who has worked with celebrities such as Dua Lipa, Rita Ora, Lena Dunham and Jonathan Van Ness

She will fill a shared wardrobe in the iconic 'Love Island' villa with second hand items from eBay, following four themes: ‘Tutti Frutti’, ‘Business vs Party’, ‘Dressed up Denim’ and ‘Heavy Metal’.

The e-commerce platform is also taking the opportunity to promote its authenticated sneakers and Imperfects range by incorporating them into the show.

Some branded items which are sold above certain thresholds on the platform are vetted by industry experts for authenticity in a bid to build consumer trust.

The platform describes its Imperfects range as the equivalent of supermarkets' 'wonky veg' initiative. It offers clothes, shoes and accessories which are considered new, but with defects, from over 100 high-street and high-end designers including North Face, Off White, Puma, Fila and Timberland at up to 60 per cent off.

Defects may include small scuffs or marks, a button missing, a loose thread or ex-display items that cannot be sold at full price.