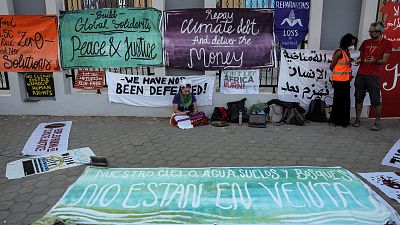 COP27 is going into overtime.

The conference was supposed to end on Friday - but with negotiations deadlocked on several key issues, it’s set to continue for another day.

As the climate talks draw to a close, what were the five key things we learnt last week at COP27?

1. Overconsumption not overpopulation is the problem when it comes to climate

On Tuesday, the world’s 8 billionth person was born.

It’s a massive milestone - and one that might concern you if you’re worried about climate change.

But though an increasing population is likely to increase emissions, the most important factor determining energy consumption isn’t actually the total number of humans.

Instead, as climate and population experts have explained, it’s how a small fraction of those people are causing far more than their share of carbon emissions. .

For example, Africa is home to 16.7 per cent of the world’s population, but produces just three per cent of global pollution. This sort of inequity is a key issue at COP27, where delegates from vulnerable nations are demanding climate assistance.

As of Friday, the draft COP27 deal did not contain a pledge to phase down fossil fuels - something that had been asked for by India, the US and the EU.

Activists slammed this conspicuous absence - and called on governments to turn away from oil and gas.

“The focus for many leaders is about making deals for fossil fuel lobbyists, surviving the next election cycle and grabbing as much short-term profit as possible,” Ugandan climate activist Vanessa Nakate said at an event on the sidelines of the UN climate talks.

3. President-elect Lula da Silva tells COP27 that ‘Brazil is back’ as a climate leader

Brazilian President-elect Luiz Inacio Lula da Silva was greeted by hundreds of devoted supporters at COP27 - and with good reason.

After years of destructive deforestation in the Amazon, the new leader promised that "Brazil is once again ready to join efforts to build a healthier planet.”

"The survival of the Amazon also depended on the election. Civilisation and values are back. The respect and human rights are back," he added.

He pledged to reduce deforestation in the unique ecosystem to zero.

Read more here: 'Brazil is back' Lula tells COP27 as he vows to end deforestation in the Amazon

4. Many parties were unhappy with the initial draft deal

On Thursday, the UN published the first draft of what could be the final deal to come out of COP27.

Based on the contributions of more than 200 countries, the document will form the basis of negotiations over the next couple of days.

The draft “stresses the importance of exerting all efforts” to keep global warming well below 2C and pursue efforts to limit it to 1.5C.

But it fails to commit signatories to a fossil fuel phasedown - and makes no mention of a dedicated loss and damage finance fund.

Yeb Saño, head of Greenpeace International’s COP27 delegation, says that the draft deal “pushes the pedal to the metal on the highway to climate hell.”

5. Parties fail to come to an agreement by Friday deadline

The conference was initially slated to end on Friday. But with delegates deadlocked over key issues, it has been extended by one day.

However, there was a breakthrough on Thursday, as the EU proposed a new loss and damage fund tied to tough emissions cuts.

But it’s unclear whether other rich nations will sign up. China and Saudi Arabia have insisted that the 2015 Paris Agreement should not be changed and said money for a fund should come from developed nations.

Watch the video above to see more from this week at COP27.

COP27: Mixed reactions over what climate summit did and didn't achieve