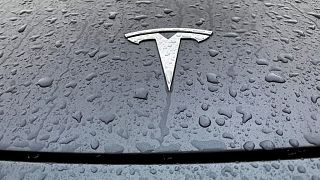 The Korea Fair Trade Commission (KFTC) says Tesla had exaggerated the "driving ranges of its cars on a single charge".   -   Copyright  REUTERS/Victoria Klesty
By Euronews Green  with Reuters  •  Updated: 03/01/2023

The country's antitrust regulator says customers were not informed that the driving range becomes shorter in low temperatures.

Tesla stands accused of exaggerating the "driving ranges of its cars on a single charge, their fuel cost-effectiveness compared to gasoline vehicles as well as the performance of its Superchargers" on its official local website since August 2019 until recently, says the Korea Fair Trade Commission (KFTC).

How much does EV driving range drop in cold weather?

The driving range of the US EV manufacturer's cars plunge in cold weather by up to 50.5 per cent versus how they are advertised online, according to the KFTC.

On its website, Tesla provides winter driving tips, such as pre-conditioning vehicles with external power sources, and using its updated Energy app to monitor energy consumption, but does not mention the loss of driving range in sub-zero temperatures.

In 2021, Citizens United for Consumer Sovereignty, a South Korean consumer group, said the driving range of most EVs drop by up to 40 per cent in cold temperatures when batteries need to be heated, with Tesla suffering the most, citing data from the country's environment ministry.

The challenge for electric vehicle performance in extreme temperatures is widely known, though EVs are popular in markets like Norway, where four out of five vehicles sold last year were battery-powered, led by Tesla.

Why does EV range drop in cold weather?

A 2020 study of 4,200 connected EVs of all makes by Canada-based telematics provider Geotab found that most models had a similar drop in range in cold weather, primarily because the battery is also used to heat the car for the driver and passengers.

Cold temperatures also slow the chemical reactions that store and release electricity in lithium-ion batteries, which commonly power electric and hybrid cars. This causes the battery to operate less efficiently.

What are the pros and cons of electric vehicles?

Electric vehicles are widely lauded as being better for the environment than combustion engine cars. There is no exhaust system and therefore no pollution.

Driving range, availability of charging points and cost are all factors that put drivers off buying EVs. But as infrastructure across Europe improves and green initiatives mandate the phase out of combustion engine cars, EVs are set to go mainstream.

However, EVs have their own environmental drawbacks. While the vehicles themselves don’t emit any pollutants, the batteries powering the motors are made with minerals that have to be mined, a process that has a huge ecological impact on our planet.

While EVs are not perfect, and possibly never will be, they are generally regarded as the best option available to reduce vehicle emissions and fossil fueldependence, especially as the technology continues to improve.