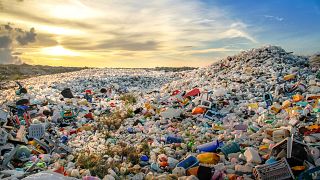 Plastic pollution is a global problem. A plastics treaty might fix it.   -   Copyright  Canva
By Maeve Campbell  & Charlotte Elton  with Reuters  •  Updated: 28/11/2022

This week could make or break the world’s first ever global plastic pollution treaty.

In March, the United Nations Environment Assembly passed a resolution to end plastic pollution - an agreement described by delegates as the most significant green accord since the 2015 Paris Climate conference.

Now, countries are preparing to meet in Uruguay to negotiate the nitty-gritty of the deal.

What is the Global Plastic Pollution treaty?

The United Nations approved a landmark agreement to create the world's first ever global plastic pollution treaty in March.

Member states held talks for more than a week in Nairobi, Kenya, to agree the outline of a pact which would rein in soaring plastic pollution - an environmental crisis that extends from ocean trenches to mountain tops.

Government officials cheered and punched the air after the adoption of a resolution to create a legally binding plastic pollution treaty, which is due to be finalised by 2024.

"We're making history today and you should all be proud," said Espen Barth Eide, President of the UN Environment Assembly (UNEA). "Plastic pollution has grown into an epidemic. With today's resolution we are officially on track for a cure."

We're making history today and you should all be proud.

The resolution, which UNEA calls "the most significant environmental deal since the Paris accord", is written in broad strokes and an intergovernmental committee is now tasked with negotiating a deal that will have ripple effects on businesses and economies around the world.

This committee will meet for the first time tomorrow, on 28 November.

Though the resolution was a major step forward, negotiators still have a long way to go.

Any treaty that puts restrictions on plastic production, use or design would affect oil and chemicals companies that make raw plastic, as well as consumer goods giants which sell thousands of products in single-use packaging.

It would also affect the economies of major plastic-producing countries, including the United States, China, India, Saudi Arabia and Japan.

What will be up for debate at the plastic treaty negotiations?

Although UN officials were united in celebrating the agreement to have a plastic treaty, disagreements remain over what should be included in a final pact, Switzerland's ambassador for the environment Franz Perrez said.

There is overwhelming public support for a UN treaty on plastic pollution, according to an Ipsos poll which found that three in four people want single-use plastics banned.

Plastic pollution is a planetary crisis on par with climate change and biodiversity loss.

Juliet Kabera, lead negotiator for Rwanda, hailed the resolution as a "great victory in the global quest to reverse the rapidly worsening impacts of plastic pollution."

If the treaty cannot put the brakes on plastic pollution, there will be widespread environmental damage over the coming decades, putting some marine species at risk of extinction and destroying sensitive ecosystems such as coral reefs and mangroves.

"The habitability of our planet is stake," Tim Grabiel, a lawyer with non-profit Environmental Investigation Agency in Nairobi said following the talks. "Plastic pollution is a planetary crisis on par with climate change and biodiversity loss."