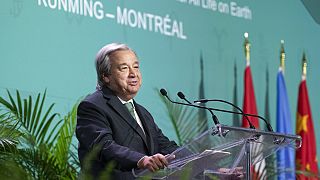 United Nations Secretary-General Antonio Guterres met with young people from around the world on Tuesday to discuss biodiversity on the eve of the COP15 talks in Montreal, Canada.

Nearly 200 countries will try to hammer out a new global framework, including a cornerstone '30 by 30' proposal to protect 30 per cent of Earth's land and oceans by 2030.

Swetha Stotra Bhashyam is the Global South Focal Point for the Global Youth Biodiversity Network. She says the discussion with Guterres showed there is still a generational gap when it comes to environmental concerns.

"The conversation itself had interesting points but it also seems that there is a disconnect, a little bit at least, between how young people are thinking and some of the key things that the world is talking about - like the 30 by 30 and nature-based solutions, which are things that young people have different views on."

But Canadian activist Frédérick Chir of the SETHY Foundation in Quebec told AFP that top officials are willing to talk - and listen. "Yesterday we had [Mayor of Montreal] Valérie Plante, we had the Minister of Culture and today it's the Environment Minster and the Secretary-General, so for us, for me as a young person, it shows the commitment of political decision makers."

But delegates at the COP15 biodiversity talks are unlikely to have an easy ride. From the outset, Canadian prime minister Justin Trudeau's opening speech was interrupted by Indigenous protesters holding up banners "To save biodiversity... stop invading our lands."

_Watch the video of the COP15 meeting above.
_