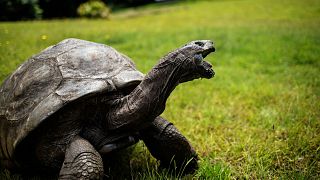 Jonathan’s estimated 1832 birth year predates the invention of the postal stamp, the telephone, and the photograph.

The iconic creature lived through the US civil war, most of the reign of Queen Victoria, the rise and fall of the Soviet Union, and two world wars.

But the giant tortoise - who has lived on the island of Saint Helena since 1882 - has taken it all in his stride.

He’s even found time for romance, developing a 26 year partnership with a fellow male tortoise.

How is Jonathan celebrating his birthday?

Jonathan is not only the world’s oldest living land animal, but he is the oldest chelonian - a type of reptile class including tortoises, turtles, and terrapins - ever recorded.

In St Helena, he is a national treasure, featuring on the reverse of the local five pence coin.

Now blind and without a sense of smell, he spends his days roaming free in the grounds of the Governor’s house.

Last weekend, these grounds were the site of a three-day festival to mark the venerable old-timer’s official birthday.

His age is an estimate, based on the fact that he was fully mature (and hence at least 50) when he arrived on the island in 1882.

“People often ask us for the date of Jonathan’s birthday. The answer is we don’t know,” the Saint Helena Island website reads.

“[But] there is precedent for this arbitrary assignment of a celebration date. Christians commemorate the birthday of Jesus on 25 December, but there is nothing to suggest that this is his actual birthday.”

Jonathan became extremely irritable in the 1980s due to loneliness. He settled down after forming a relationship with a mate, Frederica, in 1991 - but they never had any offspring.

26 years later, the mystery was solved: Frederica turned out to be male.

Jonathan still has a ‘good libido’ according to his vet, Joe Hollins.

“[He] is seen frequently to mate with Emma and sometimes Fred – animals are often not particularly gender-sensitive!” Hollins said.

Inventions that Jonathan is older than

Samuel Colt patented the first commercially successful revolver in 1836. The guns were used in wars like the US civil war (1860-64).

The first ‘daguerreotype’ images were printed in 1839. Since then, 13 trillion photos have been taken.

The hot-air balloon was the first powered airship. It was a hydrogen filled balloon powered by a steam engine.

Electricity was ‘discovered’ by Benjamin Franklin in 1752, when he realised that sparks from lightning strikes could generate power. But the lightbulb wasn’t commercialised until 1879.

The penny-farthing - the cumbersome original bicycle with a huge back wheel - was invented in the early 19th century. But the first modern bike with a chain was developed around 1885.