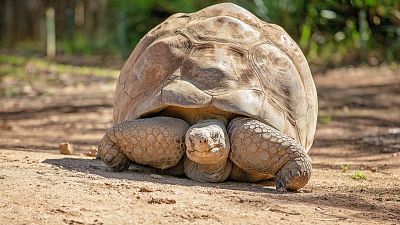 Killing these majestic creatures has been illegal since 1933. Under Ecuadorian law, anyone found guilty of killing a giant tortoise faces up to three years in prison.

But despite these strict penalties, the illegal meat trade continues. Rangers recently discovered four animal carcasses on Isabela, the largest island in the Galápagos archipelago.

The State Attorney General’s Office has opened a preliminary investigation into the deaths.

The Galápagos Conservancy - an NGO dedicated to wildlife conservancy - condemned the incident as an “environmental crime.”

“This recent poaching incident is particularly egregious as very few individuals of the subspecies Chelonoidis guntheri remain in the wild,” they said in a statement.

“We must safeguard giant tortoises and the ecosystems they depend on.”

What are Giant tortoises, and are they under threat?

There are 14 different species of giant Galápagos tortoise, all descended from a single ancestor. All of them are classified as either vulnerable, endangered, critically endangered or extinct on the IUCN Red List.

These majestic creatures usually live for between 80 and 120 years, and can weigh as much as 417kg.

The population has been devastated by invasive species, who prey on the tortoise’s young and steal their food.

They are also under threat from poachers. Tortoise meat was once considered a delicacy and still attracts a considerable price on the black market.

Tragically, the four recent deaths are not an isolated incident. In September 2021, rangers discovered the carcasses of 15 tortoises - all suspected victims of hunting.

However, it’s not all bad news for the Galápagos tortoises. Earlier this year, researchers confirmed the existence of a rare breed of tortoise, long believed extinct.

The ‘fantastic giant tortoise’ - chelonoidis phantasticus - was last spotted in 1906.

But in 2019, Princeton researchers discovered a lone female tortoise hinting that the species might live on. Earlier this year, they proved that the two specimens were related.