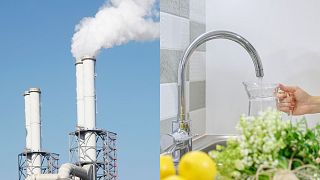 Forever chemicals - also known as PFAS, or Perfluoroalkyl and Polyfluoroalkyl Substances - are used in everything from cosmetics to kitchenware.   -   Copyright  Canva
By Charlotte Elton  with Reuters  •  Updated: 01/12/2022

Investors managing nearly €8 trillion in assets have urged the world's biggest chemicals companies to phase out the use of so-called forever chemicals.

These hazardous man-made substances have been linked to illnesses including cancer and liver damage.

As awareness around the potential health risks of PFAS grows, 47 asset managers - responsible for €7.7 trillion in investments - have written to more than 50 companies urging them to phase out the chemicals.

“We encourage you to lead, not be led, by phasing out and substituting these chemicals,” their letter reads.

The letter warns of ‘financial risk’ and ‘implications for company performance’ as ordinary citizens start bringing lawsuits against chemical manufacturers.

PFAS are known as forever chemicals because they stay in the environment for an incredibly long time.

These human-made chemicals have chains of linked carbon and fluorine atoms. Because the carbon to fluorine bond is one of the strongest there is, some of these chemicals won’t break down for more than 1,000 years.

A study earlier this year discovered the substances in rainwater in most locations on the planet - including Antarctica. Another recent analysis discovered the toxic chemicals in breast milk.

Scientists have linked the chemicals to fertility problems, increased risk of cancer and developmental delays in children.

Why do investors want companies to phase forever chemicals out?

Growing awareness of the risks of toxic chemicals has triggered a surge in lawsuits, which could cost chemicals companies as much as US$30 billion (€28.7 billion).

It is this threat of litigation that concerns the investors behind the letter, including global behemoths Aviva Investors and Storebrand Asset Management.

In the letter, the investors warn that knowledge about the negative impacts of PFAS was increasing among policymakers and could herald stricter regulations.

They called for companies to be more transparent about their global production of the chemicals, publish a time-bound plan to phase out their production and share data with non-profit industry tracker ChemSec.

In its annual ranking, ChemSec found just four companies had a plan to phase out persistent chemicals from their portfolio, and the average score was 13.3 out of 48. The ranking is based on a number of criteria, including whether or not a company uses available safe alternatives to PFAS.

"Most companies are taking little or no action to phase out hazardous chemicals despite the risks to public health, the environment and shareholder value."

Eugenie Mathieu of Aviva Investors said chemical manufacturers were still lagging behind the expectations of investors, who were pushing for better disclosure on the volume of substances being produced, which can inform better investment decisions.

The campaign to ditch PFAS is growing in popularity.

Support has doubled since the anti-investment launch last year, when 23 investors with $4.4 trillion backed a similar call, and ahead of the COP15 global talks aimed at protecting biodiversity, due to start in Montreal on Dec. 7.