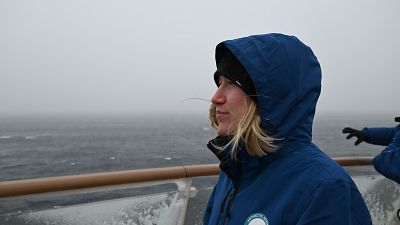 The vast majority of people will never visit Antarctica. But last month, more than 160 environmental leaders and youth activists had the chance to take part in an expedition to the continent.

Zanagee Artis, founder of US youth-led activism group Zero Hour, and winner of Global Choices' competition for a place on the expedition alongside Emma Wilkinson, Arctic Angel with US environmental non-profit Global Choices are two of the people that took part.

“There were CEOs, people that work in policy, youth activists, environmental leaders. It was really a diverse and powerful group, able to create and sustain amazing positive impact,” Wilkinson tells Euronews Green.

“The international and intergenerational expedition was truly collaborative, it was incredible to be part of.”

The ClimateForce 2041 expedition was led by Robert Swan, the first person to walk to both the North and South poles. Alongside his son, Barney, the polar explorers took this diverse group of people from 35 different countries on a journey across the Drake Passage to the west of the continent.

The purpose of the trip? To inspire meaningful action to preserve Antarctica and the rest of our planet.

Deception Island: A snapshot of Antarctica’s dark past

Antarctica’s wildlife was one of the highlights of the trip for both Wilkinson and Artis.

They were encouraged to take part in some citizen science by identifying the whales using photos of their tails, helping conservationists to understand their migration patterns.

“The whales were so incredible. Just thinking that there are other creatures on the planet that are so dynamic and intelligent, and just alive in experiencing their own ecosystem that is so different from the way that humans live, was amazing,” Artis says.

One of the excursions reminded them of the dark past the continent has when it comes to these majestic sea creatures. A visit to Whalers Bay on Deception Island was an incredibly powerful experience for Wilkinson.

In the early 20th century, hundreds of men spent the Antarctic summers here hunting whales, stripping them of their blubber and boiling down the fat to make oil for lamps. Last century, nearly 3 million of these marine creatures are thought to have been killed by industrial harvesting.

Wilkinson describes the atmosphere of the abandoned whaling station as emotional, “it's just incredibly eery and quite ghostly to see the remnants of structures, of where the oil was kept and where the whalers lived.”

For Artis, it was also a sign of humanity’s ability to adapt and change.

“This is the history of extraction from the ocean and extraction from other living things to fuel our planet. And all around us, we could see how it was being reclaimed,” he adds.

The visit to Deception Island showed him what could be possible in the future. There was a time when whales were hunted to near extinction to fuel the world - but not anymore.

“I think that's a real testament to the ability of transition. And our ability to do that today with renewable energy.”

Heatwaves and ice shelf collapses in the Antarctic

Expedition leaders encouraged the group to be fully present in the unique landscape they were travelling through. But, using internet access via a satellite phone, they read about two incredibly significant events that occurred while they were on the continent.

Then, on the Antarctic Peninsula to the west of the continent where they were based, the group experienced rain.

“The expedition leaders had shared that they actually had not experienced rain on their past trips to Antarctica, and Robert has been going for decades now,” Zanagee explains.

He says that this type of weather is incredibly rare, especially at this time of year when the days are getting shorter and the continent is moving into winter.

“The weather was very erratic,” Emma adds. “The Antarctic Peninsula is one of the fastest-warming regions on the planet, almost three degrees Celsius over the last 50 years.”

The rains are a source of concern with consequences for the entire ecosystem.

Antarctica is crucial for everywhere that we call home.

They are just one of the many impacts of climate change affecting this part of the world. Sea ice, for example, reached a record low this past summer, falling under 2 million square kilometres for the first time since satellite records began.

“Antarctica is crucial for everywhere that we call home,” says Zanagee.

“And despite the fact that there are no people who have permanent residence in Antarctica, that it has no culture, and no history of a human population, this continent is crucial for regulating local climate.”

Telling the story of Antarctica

The name of the expedition and the foundation behind it is a nod to a vital international agreement called the Antarctic Treaty.

It ensures that the continent belongs to everybody on the planet and can only be used for peaceful purposes. The treaty prohibits military activity (except in support of science), nuclear explosions and the disposal of nuclear waste while promoting scientific research and the exchange of data.

It is due to be renegotiated in 2041 and Robert Swan came to the realisation that the state of the world may mean people start looking to exploit Antarctica. The vision of the 2041 Foundation is to make sure that despite this hunger for resources, the continent remains protected.

“I think actually travelling there and seeing it firsthand is really important to sharing that message,” Artis says.

He believes seeing the continent in person will really help climate leaders like himself to tell the story of this environment that is suffering the effects of human activity.

But he recognises that it is also important for people to know that they don’t have to go there to understand why Antarctica is so important.

“They can understand the science, they can look at the images, see that environment and know that it has inherent value to take action and mobilise with us.”

Beyond its role as a critical climate stabiliser, the pair hope their stories can help people to realise that this unique environment deserves to be protected.

“I think that it has impacted our ability to capture others that may not have had an interest in the polar regions,” Wilkinson adds, “to connect them to the incredible wildlife and ecosystem.”

Click here to find out more about how to support Global Choices efforts to protect the Arctic ecosystem.

Could we hit 1.5°C of global warming in the next five years?