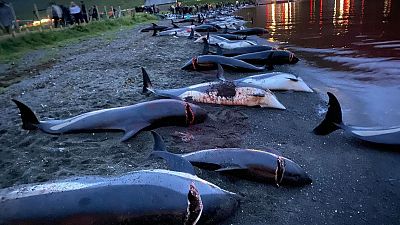 A super-pod of 1,428 Atlantic white-sided dolphins was driven into the shallow waters of Skalabotnur beach on the Faroe Islands last year, where every single one was killed.   -   Copyright  Sea Shepherd via ABACAPRESS.COM
By Lottie Limb  with AP  •  Updated: 12/07/2022

The Faroe Islands is capping the number of dolphins that can be killed in its traditional hunt, after last year’s slaughter of more than 1,400 drew international condemnation.

Under the four-centuries-old tradition, sea mammals are driven into shallow waters around the North Atlantic archipelago by motorboats, before being butchered for their meat and blubber.

Now whalers will only be able to catch 500 Atlantic white-sided dolphins a year as part of the ‘grindadráp’ hunt, which takes place between July and September.

The government on the semi-independent Danish islands announced the capping measure on Sunday, saying it was “in response to the unusually large catch” on 14 September 2021.

“Aspects of that catch were not satisfactory, in particular the unusually large number of dolphins killed,” the government said in a statement. This, it says, “is unlikely to be a sustainable level of catch on a long-term annual basis.”

The proposal is expected to be made law by 25 July, and will apply to the 2023 season too.

Will the cap actually reduce the killing of whales and dolphins?

Environmental groups have expressed scepticism about the timing of the announcement, however.

Sea Shepherd - the marine conservation organisation which has long campaigned against the grindadráp or ‘grind’ - claims “the proposed quota has clearly been put together in an attempt to distract UK politicians”, ahead of a government debate on the issue yesterday.

The UK’s Petitions Committee agreed to debate a petition calling for a suspension to Britain’s free trade agreement with the Faroe Islands until whale and dolphin hunts end, after it got more than 100,000 signatures last month.

“The government is deeply concerned by the continuing hunting of cetaceans in the Faroe Islands. These hunts are cruel, and unsustainable,” trade minister Andrew Griffith said in response.

However, he added that abandoning the UK-Faroes trade deal would be "counterproductive" as it would reduce UK influence on animal welfare standards.

It notes that the quota of 500 dolphins does not apply to pilot whales - which are actually members of the dolphin family, and the main target of the hunt. Around 700 are killed on average per year, according to the organisation's records.

The average number of white-sided dolphins killed each year, meanwhile, is just 193 over the last four decades - even accounting for the unprecedented 1,428-strong super-pod killed last year. Only 35 of the creatures were killed in 2020, according to data kept by the Faroe Islands.

As this is below the quota, Sea Shepherd says it won’t reduce the number of dolphins killed.

And even if more than 500 white-sided dolphins are killed this year, there appears to be no penalty for offending whalers.

Defenders of the whaling tradition point to the fact it is not commercial. The drives are regulated by law and the meat and blubber are shared on a community basis.

The Faroese government said it “continues to base its policies and management measures on the right and responsibility of (its) people to utilise the resources of the sea sustainably. This also includes marine mammals, such as pilot whales and dolphins.”