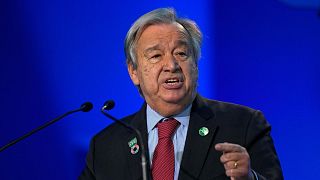 He urged global leaders at the upcoming climate summit in Egypt to put the world back on track to cut emissions, keep promises on climate financing and help developing countries speed their transition to renewable energy.

The UN chief said the 27th annual Conference of the 198 Parties of the UN Framework Convention on Climate Change — better known as COP27 — "must be the place to rebuild trust and re-establish the ambition needed to avoid driving our planet over the climate cliff."

He said the most important outcome of COP27, which begins on 6 November in the Egyptian resort of Sharm el-Sheikh, is to have "a clear political will to reduce emissions faster."

That requires a historical pact between richer developed countries and emerging economies, Guterres said. "And if that pact doesn't take place, we will be doomed."

In the pact, the secretary-general said, wealthier countries must provide financial and technical assistance – along with support from multilateral development banks and technology companies – to help emerging economies speed their renewable energy transition.

Guterres said that in the last few weeks, reports have painted "a clear and bleak picture" of global-warming greenhouse gas emissions still growing at record levels instead of going down 45 per cent by 2030 as scientists say must happen.

The landmark Paris agreement adopted in 2015 to address climate change called for global temperatures to rise a maximum of 2 degrees Celsius by the end of the century compared to pre-industrial times, and as close as possible to 1.5 degrees Celsius.

"And that means our planet is on course for reaching tipping points that will make climate chaos irreversible and forever bake in catastrophic temperature rise," the secretary-general warned.

He said the 1.5 degree goal "is in intensive care" and "in high danger," but it's still possible to meet it.

"And my objective in Egypt is to make sure that we gather enough political will to make this possibility really moving forward," the UN chief said.

COP27 must be the place to close the ambition gap, the credibility gap and the solidarity gap.

"COP27 must be the place to close the ambition gap, the credibility gap and the solidarity gap," Guterres said.

"It must put us back on track to cutting emissions, boosting climate resilience and adaptation, keeping the promise on climate finance and addressing loss and damage from climate change."

Lost and damage has been talked about for years

Loss and damage has been talked about for years, but richer nations have often baulked at negotiating details about paying for past climate disasters, like Pakistan's flooding this summer.

"Loss and damage have been the always-postponed issue," Guterres said. "There is no more time to postpone it. We must recognize loss and damage and we must create an institutional framework to deal with it."

The secretary-general said Thursday that "getting concrete results on loss and damage is the litmus test of the commitment of the governments to close all of these gaps."

"COP27 must lay the foundations for much faster, bolder climate action now and in this crucial decade, when the global climate fight will be won or lost," Guterres said.