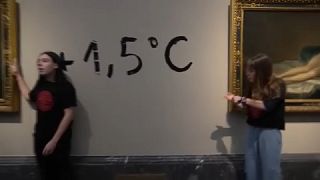 Two climate activists on Saturday have glued a hand each to the frames of two paintings by Spanish master Francisco Goya at the Prado museum in Madrid.

Police have said the protesters did not damage the works, named the "Naked Maja" or the "Clothed Maja", but they scrawled "+1,5°C" on the wall, in reference to the Paris Agreement target of capping warming at 1.5 degrees Celsius. Both activists were later detained.

The International Paris Climate Agreement was signed in 2015, in a bid to prevent the worst consequences of climate change by reducing global warming to 1.5 degrees. However, scientists have now said it was likely that the climate will warm up much faster.

Hundreds of protesters blocked private jets from leaving Amsterdam's Schiphol Airport on Saturday, the eve of COP27 in Egypt.

Greenpeace and Extinction Rebellion protesters sat around the jets to prevent them from leaving and others rode bicycles around the planes.

The environmental groups claim Schiphol is the largest source of carbon dioxide emissions in the Netherlands, emitting 12 billion kilograms annually.

Military police said they arrested several protesters for being on the airport’s grounds without permission.

Responding to an open letter from Greenpeace, Schiphol's CEO Ruud Sondag on Friday said the airport was striving for “emissions-free airports by 2030 and net climate-neutral aviation by 2050"

More than 120 world leaders will attend this year’s UN-led climate talks at the Red Sea coastal resort of Sharm el-Sheikh.

Two activists charged for 'The Girl with the Pearl Earring' protest