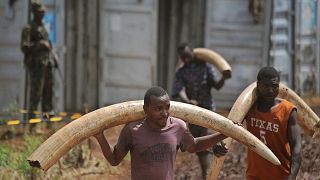 Volunteers carry elephant tusks from storage containers to a burning site for a historic destruction of illegal ivory and rhino-horn confiscated mostly from poachers in Nairob   -   Copyright  AFP
By Doloresz Katanich  with AP & Reuters  •  Updated: 18/02/2022

Scientists have been using DNA testing to track how ivory traffickers are operating in Africa.

Africa's elephant population is dwindling fast, with numbers falling from around 5 million elephants a century ago, to around 415,000 currently. A ban on the international commercial ivory trade enacted in 1989 hasn't stopped the decline either.

However, a new study is offering a ray of hope to stop poaching on the continent. Researchers have combined elephant DNA data and forensic evidence to map trafficking operations across Africa. Working hand-in-hand with the Interpol Working Group on Wildlife Crime, they are hoping to shut down these illegal operations.

Researchers have taken DNA tests performed on 4,320 elephant tusks from 49 ivory seizures, totalling 111 tonnes. The samples come from 12 African nations from 2002 to 2019, according to the study recently published in the journal Nature Human Behavior.

They have been combining their results with forensic evidence such as phone records, license plates, financial records and shipping documents, in order to map trafficking operations across the continent and trace what they describe as "transnational criminal organisations" or TCOs.

"These transnational criminal organisations we're trying to get - they are the key. Because once the ivory leaves their hands and gets out of Africa, it becomes so difficult to trace," says Co-author of the study Professor Samuel Wasser from the University of Washington.

The study has revealed that as few as three major criminal groups are responsible for smuggling the vast majority of elephant ivory tusks out of Africa.

"If you're looking simply at that one seizure, you only have one block of physical evidence … you wouldn't necessarily identify a transnational criminal organisation behind that trade. But the scientists' work identifying DNA links can alert us to the connections between individual seizures," says Special Agent John Brown III of the Office of Homeland Security Investigations, who has worked on environmental crimes for 25 years.

The study has identified key locations where ivory is poached, packed in shipping containers, then moved by truck or rail to port cities – and how traffickers have shifted operations over time in response to law enforcement.

Wasser hopes the findings will help law enforcement officials target the leaders of these networks instead of low-level poachers who are easily replaced by criminal organisations.

A quarter of large seizures of pangolin scales – an endangered anteater-like animal – are co-mingled with ivory, for instance.

Watch the video above to learn more about what elephant DNA can reveal about wildlife traffickers.

Why are elephant populations increasing in Kenya?

The new 'Big 5' are the animals we need to protect, not harm, the most