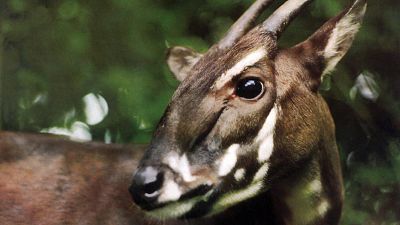 Climate change will cause one in six of the planet’s species to be lost forever if we fail to take action on the crisis, according to a study in 2015.

Five of the species on the list have approximately 100 animals or fewer left on the planet, including the Saola, of which there are only around 20 still around.

What is a Saola and why is it the fastest declining animal in the world?

Deep in the remote Annamite Mountains of Laos and Vietnam lives a species known as the 'Asian unicorn', or Saola.

It is an animal so rare that biologists have never seen it in person in the wild and it's so unknown that there’s not a single one in captivity, anywhere on Earth.

It’s so endangered that if it isn’t found soon, it will certainly go extinct.

A group of scientists are planning to launch an unprecedented two-year search to find some of the only remaining Saolas and establish a breeding program to save them. They’re building one of the most specialised wildlife tracking teams ever seen, integrating Indigenous wildlife trackers, specially-trained detection dogs, and state-of-the-art DNA tracing technology.

They’re just waiting for the investment to get started. So to help save the rarest land mammal on the face of the Earth, you can do so here.

These are the top 10 most endangered species

While all of the species on the WWF’s critically endangered list are at risk, some of them are on their way to becoming completely extinct.

Ethical travel company Volunteering Solutions has gone through the official list to find out which species is reducing in numbers the fastest.

This magisterial tiger, native to Indonesia, is decreasing at a rate of 19 per cent every decade.

As one of the three recognised subspecies of Asian Elephant, the Sumatran is also native to Indonesia and is decreasing at a rate of 19 per cent every decade.

These highly intelligent orangutans are native to Borneo and are decreasing at a rate of 20 per cent every decade.

The majestic Eastern Lowland gorilla, sometimes called Grauer's gorilla, is endemic to the mountainous forests of the eastern Democratic Republic of the Congo. They are decreasing at a rate of 24 per cent every decade.

This rare and endangered Chinese river porpoise is decreasing at a rate of 33 per cent every decade.

Sumatran rhinos are the smallest of the living rhinoceroses and the only Asian rhino with two horns. Sadly, they are decreasing at a rate of 35 per cent every decade.

The African Forest Elephant is native to humid forests in West Africa and the Congo Basin, the species is decreasing by 47 per cent every decade.

This increasingly rare great ape lives in the forested hills and mountains of the Cameroon-Nigeria border region at the headwaters of the Cross River (Nigeria). The species is decreasing at a rate of 51 per cent every decade.

The vaquita is a small porpoise found only in the northern Gulf of California (Sea of Cortez) in Mexico and is an animal that always looks like it’s smiling.

The species is decreasing at a rate of 76 per cent every decade, meaning it is likely to be completely extinct by 2050.

The Saola, also called the 'Asian unicorn', is a beautiful bovine creature and one of the world's rarest large mammals. It lives in forests in the Annamite Range of Vietnam and Laos.

The Saola is decreasing by a whopping 80 per cent every decade, meaning that it is likely to be completely extinct by 2050.

How can you stop species going extinct?

You may not think preventing animals from going extinct is a job you can do yourself. But just like using a reusable water bottle or bringing a canvas bag to the food shop, if we all thought sustainable lifestyles didn’t work - we wouldn’t achieve anything.

There are small things you can do which could make a significant impact on wildlife around the world. By just picking up a few habits around the house, you could make a difference for endangered species.

Here is a list of things you can do, according to the World Animal Foundation.

Don’t use harsh chemicals at home

Toxic chemicals used in laundry, cleaning, dish washing and personal care products end up in underground waters, poisoning aquatic life and any animals that feed on them.

Choose non-toxic products, or make your own.

Recycle plastics, paper, metal cans and glass. When you take out your rubbish bin, make sure that the bag is sealed safely so you don’t litter by accident.

Dangerous compounds such as car fluids, paint, bleach, batteries and pesticides should be disposed of properly at a specialised facility or else they risk making their way into the environment, where animals can come across them.

Take all necessary measures to prevent soil erosion in your local area and protect water resources used by wild animals close by.

For example, when you clear out vegetation, you must make sure any loose sediment is kept away from natural waterways.

Populate your garden with native plants and ask local experts to help you fight off any invasive plant species. Replace toxic pesticides and herbicides with safer options. Sterilise bird feeders and baths often to stop diseases from spreading.

Support an organisation that fights to save endangered species

If you care a lot about saving a particular endangered habitat or species, seek out an organisation on a mission and volunteer or donate.

As you gain more insight about how to protect endangered wildlife, you will become more capable of conveying that knowledge to other people. It is more efficient to share your own relevant efforts and experiences with friends and family, than simply flooding them with dos and don’ts.

To lead by example is the most effective way to show people how to start changing their lives.