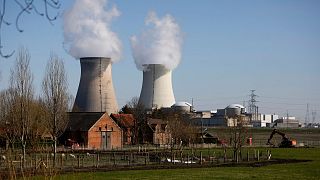 The European Commission has endorsed gas and nuclear as ‘green’ transition energies despite a huge backlash from some countries and campaigners.

The controversial ruling means that both energy sources will make it into the EU’s sustainable finance taxonomy, a technical rulebook that steers investors towards climate-conscious projects.

After months of discussion - and legal threats from some nations - the European Commission confirmed on Wednesday the place of fossil gas and nuclear on the bloc’s route to reach net-zero by 2050.

But what does the plan actually mean for consumers and the environment across Europe?

“Someone is trying to take billions of euros away from renewables and sink them into technologies that either do nothing to fight the climate crisis, like nuclear, or which actively make the problem worse, like fossil gas.

“The suspect is at EU Commission HQ and has disguised herself as someone to be taken seriously on the climate and nature crisis.”

How are EU countries divided over gas and nuclear?

The EU has previously labelled solar energy, geothermal, hydrogen, wind power, hydropower and bioenergy sectors as green. The inclusion of fossil gas and nuclear “water down the good label for sustainability,” the German vice-chancellor warned when the draft document was revealed on New Year’s Eve 2021.

The taxonomy classification does not determine whether a certain technology will or will not be part of Member State energy mixes, the European Commission states.

So as far as public investments go, it is unlikely to change the strongly-held positions of different countries. It could, however, provide more of a mandate for supportive countries like France to pump resources into their nuclear power stations.

10 countries, including France and Bulgaria, Croatia, Czech Republic, Finland, Hungary, Poland, Slovakia, Slovenia and Romania pushed for the inclusion, most of which already have nuclear in their national energy mix.

France gets around 70 per cent of its electricity from nuclear, the greatest share of any country in the world. A relatively small proportion of French electricity is powered by fossil fuels.

On the other side, Germany, Austria, Luxembourg and Spain have vocally opposed nuclear power, which - with its toxic waste - they say violates the EU’s vital “do no significant harm” to the environment principle.

How will the EC decide which gas and nuclear activities are ‘climate safe’?

Pre-empting concerns that endorsing gas sounds like a big step back on the road to climate neutrality, the EC argues that selected projects will enable us to move away from more polluting activities, like coal.

Strict conditions will be placed on the two sectors. Fossil gas-powered plants will have a limit of 270g of CO2 emissions per kilowatt-hour, and must fully switch to renewable or low-carbon gases by 2035. Crucially, they can only replace existing coal facilities that cannot be replaced by renewables.

Meanwhile, nuclear reactors will have to meet high safety standards to be part of the taxonomy, and receive a construction permit by 2045 at the latest.

Speaking anonymously to Euronews, EU officials admitted that neither gas nor nuclear are renewable and the final decision is a "balanced compromise that takes into account all views."

What does this mean for consumers and the environment?

Though the EC rules keep some checks on these polluting and potentially toxic sectors, both official and unofficial commentators have voiced strong concerns.

Friends of the Earth Europe claim that gas is not only dangerous for the environment, but it's volatile prices are locking households into energy poverty.

“We want a resilient, renewable energy system, not a dangerous polluting one that’s dressed up in green packaging."

Gas overtook lignite coal to become the largest emitter in the energy sector in 2020, according to data analysed by Ember. And with companies and investors soon to be directed to gas projects via the taxonomy, there’s a danger that the fossil fuel phase-out lingers on too long.

Member states and MEPs now have up to six months to analyse the Commission's proposal and raise objections. But it will take a groundswell of opposition to block the delegated act.

A number of legal challenges could also achieve what anti-nuclear and fossil gas MEPs can’t. Environmental lawyers at ClientEarth say the inclusion of fossil gas would be incompatible with several EU laws, including its obligations under the Paris Agreement.