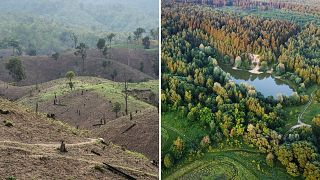 The Amazon rainforest is perhaps the most politicised of all international natural resources, in part because of its size, unrivalled biological diversity, and of course its ongoing importance to the climate crisis as an imperilled and vast carbon sink.

It is also because of the Amazon’s emblematic status as the Earth’s lungs - a status which generates high emotion globally and leaves Brazil and its politicians forever fixed under a very public environmental gaze.

European forests, on the other hand, fly under the radar, and generate little polemic, either locally or internationally, largely because few in Europe question their innate importance.

Little do we know, the surge in growth of these forests is one of the silent good-news stories of our time.

Geographically, these two contrasting examples of vision and management might seem to be unrelated, but they are more viscerally connected than it appears.

At a fundamental level they are opposite ends of success on the conservation spectrum, with the Amazon regarded as having lost up to 20 per cent of its mass over the last two generations, and Europe significantly enhancing its forest cover over the same period.

In terms of political discourse, global leaders have no tangible or emotional stake in European forests, whereas the opposite is true of the Amazon, where everyone on earth seemingly has a voice, much to the annoyance of local governments.

When Brazil’s President Jair Bolsonaro, for instance, is attacked by European leaders and urged to better protect what they regard as a globally significant resource, Bolsonaro retorts that the Amazon is in fact a specifically Brazilian national asset. As such, he argues, it is uniquely Brazil's gift to determine its future.

Bolsonaro further ups the ante by roundly and regularly accusing European leaders of harbouring an outdated colonialist outlook, and of hypocrisy in looking critically abroad when these countries have themselves historically decimated their own forestry resources.

Bolsonaro is, at one and the same time, both right and wrong in his assertions.

European forests have been massively cleared over time, but where this is generally regarded as having occurred during the industrial revolution, in fact the process was much more gradual over two millennia. It happened as pre-Europeans gradually cleared land in order to transition to croplands and pasture. Ján Mičovský, Minister of Agriculture and Rural Development of the Slovak Republic Chair of Forest Europe, regularly cites only 2 per cent of forests on the continent as having been “undisturbed by man.”

Consequently, the vast majority of European forests are far from virgin, old forest, and instead are overwhelmingly managed resources. Motivation behind this management varies and can be related to the likes of conservation, biodiversity protection, landscape maintenance or circular resource use.

But - unlike the virgin Amazon - woodland in Europe has been heavily engaged with by man for centuries, to the point where now its worth is universally understood.

Unlike the virgin Amazon - woodland in Europe has been heavily engaged with by man for centuries, to the point where now its worth is universally understood.

All of which reveals the central flaw in Bolsonaro’s accusation, in that it is fifty years out of date, because public policy across most of Europe has, since at least the seventies, swung to understand the varying values of forests. Policy today takes into account the mitigation of devastating climate futures, but also sees it as a valuable economic resource in its own right.

It protects soil and water sources, generates bio-economies and multi-directionally contributes to the economic viability of rural communities.

Nowadays, over a third of Europe’s land mass is covered by forests, an increase of 9 per cent over thirty years, with Forest Europe citing that over the same period “volume of wood and the weight of carbon stored in the biomass of European forests has increased by 50 per cent.”

It’s the clearing in Europe over the last 2,000 years, however, which should give European leaders pause for thought, as it is precisely these economic needs driving Amazonian deforestation today.

Local policy-making and an absence of enforcement exacerbates the problem, but the bread and butter of deforestation in Brazil and other South American countries is simply action driven by poverty.

The bread and butter of deforestation in Brazil and other South American countries is simply action driven by poverty.

It is activity which is undertaken by individuals and families looking to put food on their tables, activity which is tragically understandable and so small scale that it is impossible to regulate or police in the food chain of product provenance.

Even where policing is possible, for instance of medium scale producers of cattle meat, new European legislation tends to focus on meat sources and not on related products such as leather and soy feed. As a result, significant loopholes exist for a wide array of cattle meat subsidiary products.

‘Local farmers are not villains’

But all of this is akin to fighting a wildfire with a spray gun, as Russell Lello de Miranda, Councilman of remote Amazon community Humaita, is continually at pains to explain. Lello de Miranda is one of many community representatives who fervently argue that local farmers are not villains, but underprivileged and often displaced agrarian workers simply looking to survive. And that overseas funding for sustainable development and forest protection must be a genuine grass-roots affair which positively engages these families directly.

Mike Alcalde, a documentary filmmaker with Mexico Natural who has experienced frontline environmental degradation across Latin America, agrees with Lello de Miranda on the way forward.

“As so often with global issues, solutions are not best addressed by people in faraway places dealing with big picture topics and employing blue sky thinking, but working alongside and supporting real people in a local context.”

Solutions are not best addressed by people in faraway places dealing with big picture topics, but working alongside and supporting real people in a local context.

European forests have historically moved through this process, suffered and been reinvented. With a variety of environmental crises already being lived.

However, Alcalde argues that “the world cannot wait for the same process to organically unfold over time. It needs intervention, at source, with the individuals who are economically trapped into logging the wood, every day.

"Help them, and you help to solve the problem.”

The re-emergence of European forests is a story to be told, and celebrated, but it can also help politicians address the economics at the heart of deforestation.

It may not be helpful for European leaders to chide their Latin American counterparts who fall short on deforestation, but they can put a real world value on forests, and help those in need to take the decisions that will benefit them most.