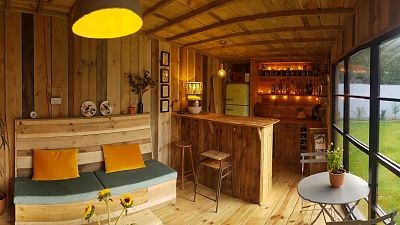 Eco pub in Devon, made of second-hand and recycled materials during lockdown   -   Copyright  Peter Sheridan
By Marthe de Ferrer  •  Updated: 01/07/2020

Bars and restaurants may be reopening soon, but one British man has used lockdown as an opportunity to build his very own eco-friendly pub.

Peter Sheridan from Devon, UK, was forced to put himself and staff at S&B Construction on furlough, after the coronavirus pandemic hit. But instead of lounging around on the sofa, he and his fiancée Lydia put their newfound spare time to good use and built a fully functioning timber eco pub in the back garden.

‘The Lock Inn’ (pun intended) took over 40 days to build, including a play area for children. Although pubs are set to re-open their doors this month in the UK, Peter says he is delighted with the finished product.

“It’s been fantastic for lifting people’s spirits,” explains Peter, “we’ve had such a positive response from people.

“As a whole we’re all really proud of it, especially as we’ve re-used so many things which would have been thrown away. It’s really taught us a lesson that with time, and a bit of thought, you don’t necessarily have to buy everything new.”

Much of the material used in the project was destined for landfill. The glass windows were salvaged from a skip, the sink was about to be binned, and most of the timber came from off-cuts. Peter also made of use of leftover paint, pipes, and insulation from other jobs which were all unlikely to be used otherwise.

By repurposing so much, the entire build came to about £4,500 (€4,980) - significantly less than an all new out-house would have cost.

Swipe below to see the stages of construction:

This was never a sole project for Peter - fiancée Lydia played an integral part too using her skills as an illustrator to create the design which Peter would then bring to life.

“We sat down and sketched some ideas,” he says, “deciding to think of a project we could do as a family, and make use of actually having the time to do something all together.”

We’ve re-used so many things which would have been thrown away.

Even the youngest member of the family had some input, as the couple’s young sons were included in the plans.

“We wanted to keep the boys involved, so came up with the idea of a secret indoor playhouse, that you access from a door under the bar. Our two-year-old son Bay loves it.”

Although some drinking establishments are gearing up to open again, the Lock Inn still has a bright future. “We very much plan to use it for our family and friends,” explains Peter, “and as we have just moved to the area we also plan to invite the neighbours over as soon as lockdown allows.”

The Sheridans are not alone in using lockdown time to pick up a new hobby. A new study by Savoo considered what Europe has been getting up to under lockdown.

Granted, not all Brits are delving into impressive timber construction projects, they are still engaging in creative pursuits with painting coming out on top as the most popular hobby. In France and Switzerland, exercise reigns supreme - while in much of Scandinavia, podcasting has been a popular pandemic distraction.

According to Dr. Ivana Poku from Slovakia’s Presov University, “hobbies have a positive impact on your mental and physical health, they give your breaks a purpose, relieve stress, and give you a sense of happiness regardless of your age.

“Thanks to hobbies you can explore yourself and discover hidden skills that go hand in hand with increased confidence and energy levels. Exploring new skills is beneficial, especially in isolation, when we feel stuck and cannot do some of the things we used to do.”

This reflects how Peter feels about his own eco-project, which has proved to be a great way to stay productive throughout such challenging times.

“We have something we built together and can look back on the lockdown situation in a more positive light,” he concludes.