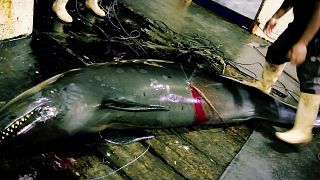 Graphic video of sharks and other fish being beaten and speared   -   Copyright  Environmental Justice Foundation
By Nichola Daunton  •  Updated: 08/04/2022

China is carrying out illegal fishing activities across the entire globe, according to a new investigative report by the Environmental Justice Foundation (EJF).

Testimonies from over 100 crew members reveal that state subsidies have allowed China’s distant water fleet (CDWF) - vessels operating beyond China’s exclusive economic zone (EEZ) - to exploit the waters of developing nations which rely on their marine resources for food security.

“I saw my crew mate get hit until he bled…He did not fight back, he could only cry upstairs,” said one crew member from a Chinese distant water vessel operating in the South Atlantic and South Pacific Oceans.

Where is the Chinese distant water fleet operating?

According to the EJF’s ‘Ever Widening Net Report’, China has the largest distant water fleet in the world. That means vessels fish outside of their national waters.

Once entirely state owned, the fleet is now almost entirely privately owned, which the EJF argues has lessened the control that the Chinese government has over the vessels.

While the fleet's presence is often authorised, its presence in the EEZs of countries in Africa, Asia and South America - many of which are home to coastal regions dependent on fishing for livelihoods and food security - raises concern. A lot of these regions lack the resources to enforce stringent marine conservation standards, making them an easy target for illegal fishing practices.

The report highlights Mauritania in Northwest Africa as one of the most significant EEZs targeted by the CDWF, with its fleet accounting for approximately 30 per cent of fishing in the zone.

Mauritania is a well known hub for the fishmeal and fish oil industry. Fish meal is a commercial product made from whole wild-caught fish and bycatch used to feed farm animals, e.g. pigs, poultry, and farmed fish.

Overfishing in this area has caused huge ecological destruction to marine ecosystems. This includes damage to locally important fish populations, which coastal dwelling communities are reliant on for food.

Shark fins and dolphins are subject to illegal fishing

According to data analysed by the EJF, the CDWF is frequently associated with illegal fishing and researchers collected many quotes from crew members to back up their research.

“If the captain ordered us to pull the dolphins up, we pulled them up…We took its teeth and threw away the body…,” a CDWF crew member operating in the North Atlantic told the foundation.

The world’s dolphins are protected under the Marine Mammal Protection Act, which makes it illegal to fish for them. Many species of dolphin, such as the South Asian river dolphin and the Baiji dolphin are also critically endangered.

According to the EJF, fishing without a licence or authorisation was the most common type of illegal fishing carried out by the CDWF, making up 42 per cent. While the capture of protected species accounted for 10.3 per cent of recorded violations, with 57 separate incidences in total.

Dolphins were not the only marine mammals mentioned by anonymous CDWF crew members though. Abuse of sharks, seals, tortoises and false killer whales was also highlighted.

We threw away all small-sized sharks. For the bigger sized sharks, like above 20kg, we would take the fins only and throw away the bodies,” said one crew member operating in the Indian Ocean.

“We threw away all small-sized sharks. For the bigger sized sharks, like above 20kg, we would take the fins only and throw away the bodies,” said one crew member operating in the Indian Ocean.

Shark finning is a cruel practice whereby the fins of sharks are removed, before the still living shark is thrown back overboard to die. The fins are used to make shark fin soup, an expensive delicacy in China and increasingly in western nations too.

Another crew member, operating in the South Pacific said: “Every day. We caught more sharks than tuna. In a day we could only catch five to six tuna and dozens of sharks. I heard that they sold the sharks in Taiwan or Fiji.”

In order to hide the shark fins, another crew member told EJF, “we covered them with plastic” as the crew knew that harvesting the fins was illegal.

Smartphone footage captured from the vessels also shows seals being clubbed to death and beheaded and crew members also informed the EJF that protected turtles and seals were also caught and killed.

How is illegal fishing harming the world’s oceans?

According to WWF, the world’s oceans support the livelihoods of an estimated 520 million people and feed 2.6 billion people who depend on fish as a key part of their diet.

The illegal practice is closely tied to overfishing and the Food and Agriculture Organisation of the United Nations estimates that the number of overfished stocks have tripled in half a century.

Bycatch - the fish and marine mammals caught while fishing for different species - is also a common side effect of illegal fishing, with hundreds of thousands of marine mammals lost each year as a result.

It’s not just marine mammals who are suffering on board some CDWF vessels though, many human rights abuses have also been documented by migrant crew members.

“I was often hit and kicked although I did not make any mistakes,” said one crew member aboard a ship in the Indian Ocean.

“The foreman was an emotional person and stressed out too. When he was mad at the Chinese, the Indonesians had to take the blame...I am so mad. He (the captain) did not respect me as a human.”

Alongside physical violence, poor living conditions were also reported, including gruelling working hours and inadequate food. One crew member who spoke to the charity stated that the crew had to leave their drinking water to settle for a day before consuming it, so they wouldn’t get sick.

Overall, 58 per ent of the crew interviewed said they had witnessed or experienced physical violence, while an enormous 97 per cent of those the EJF spoke to said they had experienced some form of debt bondage - when a person is forced to work to pay off a debt - or had their official documents, including passports, confiscated.

What measures have the EJF recommended?

The report makes a number of recommendations to the Chinese state, including:

The charity also makes recommendations to states that act as local flag carriers for the CDWF and to coastal, port and key market states that the CDWF operates in, including:

You can read the full report here.