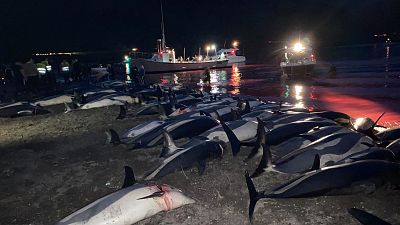 Over the weekend, 1428 dolphins were slaughtered in the Faroe Islands.

The deaths came as part of the latest ‘grindadráp’ hunt — a Faroese tradition of dolphin drive hunting in which dolphins are herded towards land by motorboats, before then being killed by whalers on the shore.

Marine conservationists Sea Shepherd are calling the event the largest single hunt of dolphins or pilot whales in Faroese history. The next largest was in 1940 when 1200 pilot whales were killed.

“It is possibly the largest single hunt of cetaceans ever recorded worldwide,” the organisation added in a statement released today, after sharing footage of the killing which took place 40 kilometres into Danish water.

There has been much debate over whether the Indigenous hunting event is a “horrific” act of cruelty or an important cultural practice providing islanders with a sense of Faroese identity and community, as well as meat for food.

Though grindadráp often makes headlines for images of blood-red seas, people shouting, and animals thrashing, those who uphold the hunt maintain it is a community-based activity that is rooted in tradition dating back to the 16th century.

Until now, this has enabled the Faroe Islands to avoid legal repercussions.

Meat is intended to feed local families, however, in the case of the present slaughter, it is likely that there will be too much to feed the 53,000 island inhabitants - meaning a large portion could be wasted.

PETA has long argued the consumption of whale meat on the island as a “tradition” is long gone, with only 17 per cent of islanders saying they consume pilot whale meat and blubber regularly.

“The hunt these days is far from the traditional subsistence hunt of previous centuries,” Rob Read, COO of Sea Shepherds, tells Euronews Green.

“The grindadráp now takes place with high-powered boats and Jet Skis, and is little more than a sport masquerading as tradition.

“The meat is not needed by the wealthy Faroese community, and the hunting method is totally indiscriminate, killing every member of the pod.”

However, cultural sensitivity and an understanding of the history of whaling in the region may prove crucial to engaging with the issue.

Read tells Euronews Green that he hopes to develop an internal team on the Faroe Islands who can work to help navigate the complexities of ending the practice.

Hunting without a licence

Licences are required for dolphin and whale hunting in the Faroe Islands to ensure hunters are trained in how to quickly kill the mammals, in order to prevent suffering.

However, the present hunt has also come under fire for breaking several Faroese laws. Many have argued the event was unauthorised and that a great number of participants this weekend were unlawfully involved in the hunt.

Usually reluctant to publish anything against the tradition, the scale of the current slaughter has also caused Faroese news outlets to speak out against the practice, with Hans Jacob Hermansen, a former chairman of the hunt calling the kill unnecessary.

The Faroe Islands sits among Japan, Norway, and Iceland as one of the main culprits for the killing of nearly 40,000 large whales since commercial whaling was banned in 1986.

For perspective, this Faroe Island massacre at Skálabotnur approaches the quota set for the entire six-month hunting season for killing and capturing dolphins at Taiji in Japan, exceeding all Japanese hunting numbers of recent years.

120 whales have been rescued on a beach in Sri Lanka

Rescued beluga whales are in training for their new home