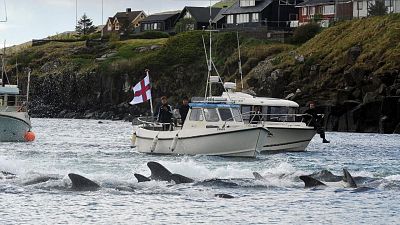 Conservationists are speaking out against the Faroe Islands and its “barbaric” whaling practices after the island’s first hunt of 2021 led to the deaths of 10 animals.

They say that the small archipelago is responsible for the deaths of hundreds of long-finned pilot whales each year as a food source for the island’s people. Pods of whales are driven to the island's shores from the North Atlantic year-round to be killed and shared among its communities.

A Facebook post, titled “The Sick Islands”, by ocean welfare campaigners the Blue Planet Society, asks followers to sign a petition against the practice. Nearly half a million people have signed up since its launch.

“To put this barbaric, outdated behaviour in context — the last pilot whale hunt in Shetland was in 1928 and Orkney in 1889,” the post explains, comparing the island to its nearby Scottish territories.

The island sits among Japan, Norway, and Iceland as the main culprits for the killing of nearly 40,000 large whales since commercial whaling was banned in 1986.

Since placed on #GreenList media outlets are claiming that the Faroe Islands is a great destination for wildlife lovers. We disagree. https://t.co/Sa5m5R2ITO

Those captivated by Netflix documentary Seaspiracy earlier this year will be familiar with the issues brought to light by the Blue Planet Society. Similarly, the island also made headlines in 2019 when hundreds of whales were killed in one sitting, causing the surrounding sea to turn blood red.

Blue Planet has also spent time calling many media outlets out for failing to highlight the island’s history with whaling through tourism-focused articles shared in light of lifting COVID-19 travel restrictions.

You missed one very important thing @Guardian: they still torture and kill EU protected whales and dolphins in an archaic and barbaric hunt called the Grindadráp. https://t.co/Ti2ya39He9

The ritual has been defended as a tradition

Faroe islanders have long been able to use legal loopholes by citing their hunts as rooted in a tradition that dates back to the 16th century.

There was a time where this argument would have held up - the meat from one whale native to the island's waters would be able to feed several families.

But PETA argues that the consumption of whale meat on the island as a “tradition” is long gone. Only 17 per cent of islanders said they consumed pilot whale meat and blubber regularly.

Health concerns have also been raised due to the meat’s potentially high mercury concentrations. It is akin to that of mass salmon consumption, which can also be toxic to humans.

Ocean animals that are larger and have lived for longer are scientifically more likely to accumulate high amounts of mercury. Recent studies link human consumption of the metal to conditions like Alzheimer’s, Parkinson’s, autism, depression, and anxiety.

What the island has to say about it

A visit to Faroes tourism website displays a lengthy defence of the island’s hunts.

“As has been the case for centuries, whaling still occurs in the Faroe Islands today. The Faroese have eaten pilot whale meat and blubber since they first settled the islands over a millenia ago,” it reads.

“Today, as in times past, the whale drive is a community activity open to all, while also well organised on a community level and regulated by national laws.

“Records of all pilot whale hunts have been kept since 1584 and the practice is deemed sustainable, as there are an estimated 778,000 whales in the eastern North Atlantic region. Approximately 100,000 swim close to the Faroe Islands, and the Faroese hunt on average 800 pilot whales annually.

“The meat and blubber from the hunt is distributed equally among those who have participated. Those who are too ill or weak to take part are encouraged to sign up for their share, even though they have not taken part.”