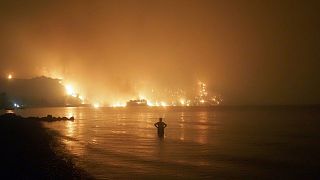 The weather in Europe this summer has been memorable for all the wrong reasons.

We’ve seen parts of Greece and Turkey ravaged by wildfires and the people of Sicily, faced with unlivable conditions due to severe heatwaves.

Climate agency Copernicus has declared 2020 as Europe’s hottest ever due to several record-breaking weather events and exceptional high temperatures.

These findings were verified by the Met Office less than 24 hours ago as talk of warming temperatures remains on governmenthe agendas across the continent.

It’s too soon to tell if this year has exceeded more high temperatures than ever, but few countries can say they haven’t experienced some sort of record breaker since the year began.

Even those within the Arctic circle are facing uncharted territory when it comes to temperatures.

We’ve put together a list of places where major records have been broken this year so far.

Lapland under extreme heat right now. 34.3°C at Banak, Norway ?? This level of heat has never been observed above 70 degrees north in Europe before.

Scandinavia has been in the oven for a while. A very hot June followed by a hot start to July. Widely 10-15°C hotter than average. pic.twitter.com/dYLHOMrhLQ

Kevo, situated in Lapland, recorded heat of 33.6°C, the warmest climate documented in the country for over 100 years. Another village, Utsjoki, commonly associated as Father Christmas’ home in the winter months, was measured at a marginally lower 33.5°C.

Neighbouring countries Sweden and Norway have suffered similar heatwaves which experts are attributing to the warming climates witnessed by North America across the Atlantic.

People living in Greece's capital were left in disarray when The National Observatory of Athens (NOA) confirmed temperatures of 46.3 °C in early August.

The first two days of the month saw over 100 wildfires, including a major fire near Athens that cut the main road linking the north and south and forced hundreds of people to evacuate.

A cloud of smoke hangs over the Acropolis as crews battle a major fire north of Athens. Greece is currently in the midst of its worst heatwave in decades, with temps reaching nearly 110 F / 40 C in #Athens today pic.twitter.com/eABYenAKWm

The country faced power outages in some areas and the Ministry of Culture and Sports announced the closure of open-air archeological sites across the country between 12-5pm for several days.

This Eastern Icelandic forest town has grappled with one long, hot summer. The area relies on sea breezes and cloud coverage to maintain its mild climate and was faced with problems when holes in the grey skies brought temperatures to 29.3°C.

Yet another #heatwave in this "crazy" month of August

Now it is ?? #Iceland’s turn to experience exceptional temperatures♨️

Meteorologists confirmed this broke records last set in a heatwave 13 years prior - and still have the potential to exceed previous highs dating back to 1939.

Across the country, local news outlets reported that animals were becoming ill and unable to adapt. Widespread warnings were distributed by veterinarians, telling people to keep their cats, dogs, and horses inside.

The town of Syracuse on the Italian island of Sicily reached 48.8°C on August 11.

The World Meteorological Organisation later verified that this was the highest known temperature ever recorded in Europe. The conditions forced the entire country to declare a state of emergency .

A “heat dome” of high pressure spanning the Mediterranean created a domino effect of extreme weather events that scientists attribute to global warming.

It is believed that Sicily was left most affected due to the “foehn effect” - the transition from wet, cold conditions on one side of a mountain to warmer, drier conditions on the other. Greece, Turkey, Tunisia and Algeria were also left severely affected by what unfolded.

Russia is a country of complex climates given its land mass. But that doesn’t make Moscow’s red-hot summer any less unusual, given it’s coldest months reach below-zero temperatures.

Moscow hit by a historic #heatwave due to the effects of #climatechange; on Monday, Russian capital sweated under 34.7 degrees Celsius, matching the record for a June day from 1901 pic.twitter.com/3L9KZiGx0Y

On average Russia is experiencing temperature rises 2.5 times faster than the rest of the world, according to the BBC.

The problem extends far beyond Moscow as areas within the Arctic Circle several thousand miles away, such as Yakutia, record far beyond their norms with heat as high as 31.1°C.

On August 14, thermometers in the southern city of Montoro recorded unfathomable temperatures of 47.4 °C. This surpassed Spain's previous record, set in 2017, by 0.1 °C.

Public thermometers soon became tourist attractions as people stopped to take pictures of the figures. Some restaurants installed sprinklers to spray mists of water over their guests in areas with high saturations of tourists.

All-time August records were also set in Madrid and Cordoba during this period. They reached 40.5 and 46.8 °C respectively.

Turkey has endured wildfires across the country that were measured four times more intense than anything they’ve handled before.

The dry land resulted in the south-east town of Cizre, near the Syrian border, breaking its own 60-year old record when it reached 49.1°C, well above the seasonal norms for the area.

Flames light up the night sky in the coastal village of Cokertme as deadly fires continue to burn in #Turkey and a heatwave intensifies in the eastern Mediterranean. pic.twitter.com/LVbSiehXMV

Thousands of people across the nearby tourist regions of Antalya and Muğla had to be evacuated by boat in scenes that went viral on social media as people expressed their disbelief.