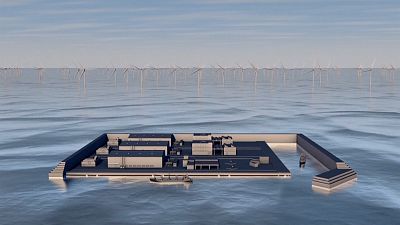 Illustration of what the future wind farm island will look like.   -   Copyright  AP Photo/Danish Ministry of Climate
By Doloresz Katanich  with AP  •  Updated: 08/02/2021

Denmark has approved plans to build the world’s first artificial energy island in the middle of the North Sea.

Located 80 kilometres west of the Jutland Peninsula, it will initially have an area of 120,000 square metres or the size of 18 football pitches. The island will be linked up to hundreds of wind turbines providing power to several European countries.

“It’s a new way of thinking about offshore wind, because the usual way is you have one offshore wind farm that’s connected to land,” says Danish climate minister Dan Joergensen.

“This is a way of creating a much more renewable energy than we've been able to do before offshore.”

"With 10 gigawatts, which is the future plan for this island, that will create energy enough for 10 million households," Joergensen adds, "and there is only under six million people in Denmark, so obviously, we also want to contribute to the development of a green strategy for the whole of Europe."

The floating energy island could also be used to fuel ships, planes and trucks using renewable electricity. Wind power would be converted into hydrogen which can then be turned into liquid fuels. Joergensen says this would solve two problems: how to store renewable energy and how to get it into the transport sector.

Denmark has agreed to take the majority share of the 210 billion kroner (€28m) project, which will triple the amount of offshore wind the country has. It will be the largest construction project in Danish history and is set to be completed by 2033.

The Nordic country decided to halt its search for oil and gas in the North Sea in December 2020, as part of one of the world’s most ambitious targets to reduce carbon emissions. In the past, Denmark has made a lot of money from fossil fuels and the environment minister says they are the biggest oil producer to set a cut-off date for extraction.

“We’ve said that we want to reduce our emissions by 70 per cent in 2030 compared to 1990. We’ve even made that into a climate act so it’s legally binding,” says Joergensen.

“If we don’t make a living on oil, if we want to be green, we need to develop.”

Click on the video above to learn more about the world's first energy island.