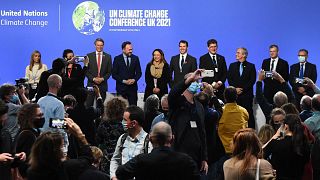 A "first of its kind" alliance of governments has committed to phasing out the production of oil and gas.

This sets the bar for entering the alliance high and experts say it shows these members have recognised that phasing out fossil fuels is an urgent part of tackling the climate emergency.

Who has joined the Beyond Oil and Gas Alliance?

California and New Zealand join the alliance as associate members and Italy also expressed their support to the coalition, becoming a 'Friend of BOGA'.

This means that in total 11 members have signed up in some way. But the group says that it is in talks with other governments including and hopes to be able to announce more names soon. Reporters were told that BOGA was "in close dialogue" with host nation Scotland.

"Our goal is not small, our ambition is not modest. We hope that today will mark the beginning of the end of oil and gas," Dan Jørgensen, Denmark's Minister for Climate, Energy, and Utilities said at the launch.

"We the 11 founding governments have decided to move beyond oil and gas."

There's no future for oil and gas in a 1.5-degree world.

"We don't answer this call for the thrill of the challenge. We do it because we truly believe that we need to. We are unwilling to accept the consequences if we don't," Jørgensen added.

Earlier this year experts from the International Energy Agency (IEA) made it clear that there can be no new fossil fuel projects if the world is to stay below 1.5 degrees of global warming.

But phasing out oil and gas entirely has been a sticking point at the Glasgow climate conference. As Minister Jørgensen said at the launch, though the goal seems simple, it is "somehow provocative" to state that we need to end the production of fossil fuels.

If we want to keep global heating below 1.5 degrees, a managed decline of fossil fuel production is the only way.

“Last week’s flurry of announcements created a lot of headlines, but initiatives like the Beyond Oil and Gas Alliance show what real climate leadership looks like,” says May Boeve, executive director of 350.org.

“If we want to keep global heating below 1.5 degrees, a managed decline of fossil fuel production is the only way.

"This alliance is a great first step to start that process.”

The commitment made by these first members is an essential move towards the 'just transition' that has often been talked about at this COP. Now, the alliance says, all countries must commit to ending new oil and gas projects - particularly those in the Global North.

The UK is conspicuous in its absence from this new alliance and critics say it shows a lack of leadership from the COP26 presidency.

"UK Prime Minister Boris Johnson will lose what’s left of his climate credibility if he fails to rule out new oil and gas and presses ahead with proposals for a new oil field at Cambo after he’s told other countries to ‘pull out all the stops’ at COP26," says Rebecca Newsom, head of politics at Greenpeace UK.

She adds that we need to see much more leadership from the most developed countries - including the UK.

"The UK Presidency has a particular responsibility to make sure this COP is a success and delivers a truly ambitious commitment from world leaders in the final Glasgow agreement to phase out fossil fuels.”

UK Prime Minister Boris Johnson told reporters yesterday in Glasgow that he would take a look at the announcement from Denmark and Costa Rica but did not give a reason why the UK was not supporting the new group.

He did stress that the "UK wanted to move beyond hydrocarbons completely as fast as possible".